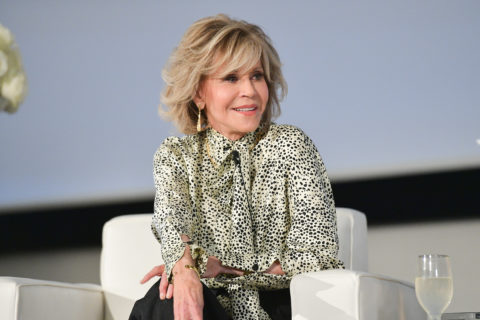 There's a reason she's a legend.

On Wednesday of this week, a select number of men and women took their seats at the cinema in Toronto’s Hotel X. The room was a abuzz at first before a hushed silence fell across the crowd, as it became clear the guest of honour was about to set foot on the stage. But who could command such a reaction? Only the legendary Jane Fonda.

Fonda, a long-time L’Oréal spokeswoman, joined CTV’s Marilyn Denis on stage for a lengthy Q&A, touching on all aspects of her life. From exercise (and it’s many benefits) to ex-husbands, the causes she’s passionate about and her career, there was no subject seemingly off-limits. A passionate activist, Fonda (who said her go-to product is the brand’s matte lipstick) didn’t hesitate to pepper the conversation with important messages on self-love and environmentalism, either.

Here, we round up the 15 best quotes from the panel:

On the power of women

“I grew up at a time when the thinking was that women were like cats, competing with each other, knocking each other down. And that’s changing and it has to change even faster. One of the existential reasons why it’s important is that the world is facing a crisis that is different than any crisis we have faced in human civilization – you know what I’m talking about; the climate crisis. I believe deeply that women are, and will continue to be in even greater numbers, leaders in the movement to stop climate change and there’s all kind of evolutionary reasons why that’s true but this is a time where women have to stick together.”

“Most of my friends are women and they keep me honest, they put starch in my spine and make me strong and inspire me.”

“As individual women – we are the stars of our own lives and so we have to own it. We have to own this one precious life that we have and make the most of it inside ourselves and outside ourselves. [L’Oréal’s] ‘Because You’re Worth It’ is a wonderful slogan – we are worth it. Too many of us are told that we’re not and we have to overcome that and own our lives and take agency into our own hands.”

On how beauty became a more inclusive space

On who inspires her activism

“I think the person to look to is Greta Thunberg. For me, listening to someone [like her] or the students in North America from Parkland school in Florida – they’re so articulate, they’re fighting to have a future, they’re angry because we old people have robbed them of a future and so, I think right now we have to listen to the young people and follow their lead, as well as the lead of indigenous people… They know because they live on the land, they are on the front line. And I think between young people and indigenous people, we have to stay alert and open and listen carefully and we’ll know what to do if we do that. And we have to tell our leaders to pay attention.”

On the importance of Grace & Frankie

“Well as an activist it’s really important, let me tell you. It’s a lot better to be knocking on doors and talking to people who voted for Trump when you have a hit series behind you. It also is very moving to me, how many women come and tell me and Lily [Tomlin, her co-star], that it gives them hope and it makes them less afraid of getting old.”

“It’s the only strategic thing professionally that I ever did. I got this script – it was not a good script – but Jennifer Lopez was in it and I had not worked for 15 years. My part was way better than hers, and so I thought I’m going to do it, I’ll make the script better. And I said, people will come to see the movie because of Jennifer Lopez but they’ll discover or rediscover Jane Fonda. And its true!”

On the importance of working out

“I didn’t start working out until my 40s. It matters more when you’re older, because a young body is forgiving but when you’re older, man just turning around when you’re driving to look over your shoulder, getting in and out of an SUV, you’ve got to stay strong. (laughs) Not to mention, making love, can we talk about the amount of flexibility and energy [you need for that]?”

On what Rihanna said to her when they met

“Rihanna said to me, I want to be like you when I grow up. But it’s weird because I don’t feel like I’ve grown up yet!”

On her red carpet inspiration

“I try to channel Gwen Stefani. I don’t like red carpets, I’m very self conscious, I don’t know what to do but I’ve studied Gwen Stefani. There’s always the hand on the hip and [a head thing].”

On being friends with her ex-husbands

“Life’s too short. And if you wait long enough, what you find out is that you were at least half responsible. We have to own our responsibility and then you can forgive the other person, which makes life much easier.”

On studying herself ahead of her 60th birthday

“It was pretty easy in my case as my father was famous and I became someone that was interviewed from my 20s, so I could go back and read those interviews and films and photographs, and then there was the 23,000 pages of FBI files on me in case I forgot anything I could read that… And by the time I reached my 60th birthday, I kind of discovered that I had been kind of brave and I was deserving of love and respect and that there were certain things I need to accomplish before I die – like showing up for my children more, learning how to forgive, asking for forgiveness, things like that. I wasn’t afraid of dying, I was afraid of regretting. When you do that and you embrace the fact that you’re mortal and you’re going to die, it’s wonderful because it then defines how you’re living and it makes your living much more intentional and we need to live intentionally. I think that’s the most important thing that I’ve come to in the past 22 decades and will carry forward until I die.”

“Get him to stop with the pipelines, get him to stick with what he said at the Paris climate summit, get him to be a true environmentalist, get him to support indigenous people here. Force him to live up to his words otherwise we should never trust a cute liberal again.”

“You’ll read about it in the paper. I’m upending my life and moving to Washington DC.”

Photograph by George Pimentel
Get the best of FASHION in your inbox Thanks for signing up!
The latest fashion, beauty and celeb news delivered right to your email #FASHIONforall Now, check your inbox to complete your subscription
We won’t ever use your email address for anything else
Want even more FASHION? Follow us on social media.