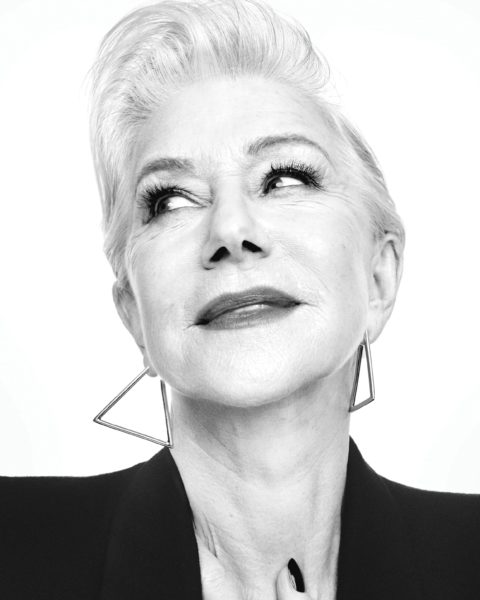 “I so personally disapprove of it; I think it’s wrong”

When Dame Helen Mirren greets me at the door of her hotel suite, my immediate reaction is to curtsy. Not just because she has played the Queen and is the female equivalent of a knight but because the woman is so well respected that, quite frankly, she deserves it. But rather than tut-tutting and nodding, as you would expect from someone with a distinguished title, she radiates warmth with a wide, open smile and ushers me in. The publicists quickly scatter, and suddenly we’re one-on-one. Her outfit of a long-sleeved black and white polka-dot dress cinched with a patent-leather belt accessorized with pearl drop earrings and black leather booties is elegant with flourishes of badassery—just like the actress herself.

“Why has it taken so long? It’s very annoying. It’s the first time in my life that I wish I were younger.”

Mirren is in Toronto to host L’Oréal Paris’s Women of Worth Awards Gala as one of the company’s brand ambassadors (she’s the face of Age Perfect Cell Renewal Rosy Tone Day Cream), and whether she is thinking of #TimesUp, the Women’s March or the conversation about the pay gap in Hollywood, the current climate around the future of females is definitely on her mind. “Something amazing has happened,” she says, taking a seat. “Why has it taken so long? It’s very annoying. It’s the first time in my life that I wish I were younger.” At 74, Mirren is otherwise very happy with where she is in her life. “It’s more interesting, I’m freer, I’ve got more money,” she explains. In fact, her mother made a point of telling her not to worry about aging, assuring her that something wonderful would happen. “I have to say it transpired to be absolutely true,” she says. For Mirren, this happened around age 50, when she felt “that sense of ‘Oh, I see—this is the advantage of getting old.’” She explains, “When you reach each age, you find that the reality of being that age is great and you wouldn’t change it.”

“When you reach each age, you find that the reality of being that age is great and you wouldn’t change it.”

Which is why she was thrilled when Allure put her on its September cover last year as part of its ban on the term “anti-aging.” “It was something I always said to L’Oréal when I first came on board,” she says. “I so personally disapprove of it; I think it’s wrong. It puts women at a disadvantage.” The other opinion she shared with the beauty company was that there should be no retouching of her in photos. (Clearly, neither request cost her the contract.) Mirren sees advocating for these changes in the beauty industry as part of the larger picture that has contributed to the current sea change. “It’s all these little building blocks toward what’s happening now at this moment,” she says.

“I so personally disapprove of it; I think it’s wrong. It puts women at a disadvantage.”

At the same time, Mirren recognizes the value in beauty products themselves—especially for what they can provide mentally and emotionally. Last year she was quoted as saying that although she loves moisturizer, it “probably does f— all,” but today she clarifies that what she meant was it’s about how these products make you feel. “If you feel good, your whole demeanour—your whole way of looking at the world—is a completely different thing,” she explains, adding that she loves makeup and wears it almost every day. “The world is a complicated, difficult, challenging place to be, so any ammunition for your battle with it is a good thing.”