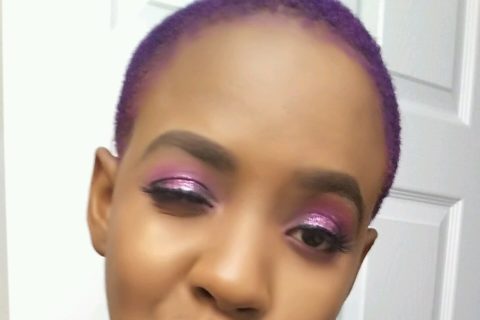 Hair Dye Horror Story… or Is It?

I have no clue what my natural hair would look like—or feel like— if I were to grow it out again. It’s been a while since I’ve even had hair.  When I did, I struggled with it because it didn’t look like what society deems beautiful. It wasn’t smooth and silky. It was kinky and curly and it really influenced how I felt about myself. In 2011, I decided to chemically straighten my hair and install weave extensions because my boyfriend at the time wanted me to. For two years, I felt really beautiful but one day I thought to myself  “Am I doing this for me? Is this what I want?”  It was at that point I came to the conclusion that I needed to regain control over my appearance. I decided to let it go natural again, even though my boyfriend didn’t agree.

In 2016, I decided to shave my hair completely bald—and also dump my boyfriend. He had been telling me that I wasn’t beautiful because I didn’t have long hair like other women. My mom, who has always been an advocate for natural hair, encouraged me to embrace my own beauty. I wanted a fresh start in my life—and that included shaving off all my hair. It was another rebellious act against what society—and my ex—was telling me was beautiful. To my surprise, I received many compliments about my shaved head as well as the shape of my head. It was such an ego boost that I was like “Imma just continue this!” The truth was I was still one step away from regaining control over my looks because once again I was being influenced by what others thought was beautiful.

Last year, I started to experiment with colour so I bleached and dyed it different colours every two weeks. My goal was to look original on my own terms.

A few weeks ago, my hair journey took a turn from creative adventure to horror show. I recently bleached my short-cropped hair a platinum blonde and then a few weeks later I dyed it using Adore Pink Rose 82. This was after I had bleached it four times to eliminate the previous colour. By now my scalp  was burned. Crazy, right!?  Oh, I didn’t stop there. I decided that I wanted to chemically process my hair to achieve a finger curl look with the little growth that I had. I didn’t go to a hairdresser because I imagined her asking me why I didn’t grow my hair and why I didn’t know that dyeing short hair on my basically bald head was unhealthy.

I bought an Organix Root Stimulator Olive Oil Relaxer for $15 and set about doing my DIY makeover. I mixed the two packets of activating cream to the relaxer base. After 20 minutes of applying the mixture to my scalp, I didn’t feel any burning sensation, so I thought: “why don’t I leave it in for 20 more minutes?” #bigmistake.  I went to wash it out—quite excited to see what my new waves would look like—but as I started to rub my scalp my hair began to fall out. I was supposed to be going out on a date in two hours and my head was a total disaster.  If you think an almost-bald head couldn’t go any balder, think again. I was with left with bald patches and a cancelled date ?.

So what did I learn? 1. Always, always read the instructions and follow the recommended treatment time. 2. Next time, I’ll consult a hair care professional before I decide to bleach it multiple times and then attempt a relaxer. 3. The upside! Even though this recent adventure was more of a misadventure, it was still my decision to experiment and the spirit behind that decision still stands. I define what being beautiful means—and in my case, that even means having a bald, patchy, gorgeous head.