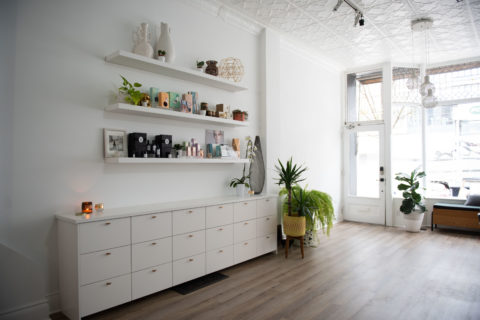 Owner Mary Dang is known for tweezing only and guiding everyone to their best, most natural-looking brows.

“We’re going to look back 10 years from now and wonder ‘What were we doing? Why did eyebrows look so sharp and strong and drawn in? And why were there so many steps?’,” says Mary Dang of the future shame and disbelief we’ll feel about Instagram brows. The dark and block-y arches were not as ubiquitous in 2011—when Dang first set up her brow service business Eye Love Beauty Bar as a solo operation—but as they’ve grown in popularity, so has the need for Dang to correct them. (She is doing God’s work). “You want to look like yourself when you take off your eyebrows.”

Since the beginning, Dang has become known for her meticulous and thoughtful approach to brows, using only tweezers, believing that methods like waxing and threading lend themselves too easily to over shaping. Plucking is also a technique that felt natural to her. “It’s like holding a makeup brush,” she explains. “You’re delicately going through someone’s eyebrow, combing it and looking at each hair and removing where you need to and leaving what you need to leave.” Each client’s face is carefully assessed so that the brows are seen as part of the whole picture and not “a separate entity”. It’s a skill that she looks for in her own staff—she basically auditions them by having them do a brow shaping and watches their every move with a discerning eye—which she eventually had to add when word of mouth spread and her clientele rapidly grew.

#Browsoftheday #naturalbrows #archaddicts #featheredbrow #browsonpoint #torontobrows #tweezerman NO WAXING NO THREADING. Meticulously shaped by tweezing. I have never been a fan of a really high arch or brow shapes that are overly forced in. Embrace your natural brows in all their glory because they’re gorgeous :)

Brow interventions are common, even if a client didn’t come in actively seeking help. “We’re not afraid to tell them what’s wrong,” she says. If the arches are too far apart, too long, or too shaped, Dang or another staffer will gently point out the egregiousness by filling one in and showing the difference between the two brows. “Once they see that and really understand what it is that I want to do by comparing it to the other side, they’re already sold,” Dang says. “It’s just taking the time and educating them on why.” Ultimately the goal is to keep everyone’s brows “as close to their natural state as possible.”

Now, Dang has outgrown her original location entirely and recently moved to a larger space. The expansion includes more services; in addition to brow grooming, makeup applications, lash lifts and tints, she’s now offering lash extensions (“But the Eye Love way,” she stresses, meaning natural versus absurd volume), facials using Caudalie products and dermaplaning, an exfoliation and facial fuzz removal method. There’s a team of five, including Dang, who with the help of her staff, is adamant about one thing: “I want to make the brow world a better place.”