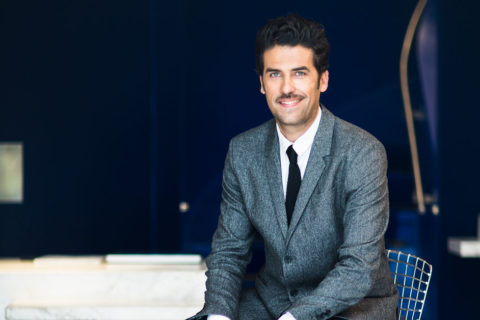 There’s a pep talk happening when I arrive at the Saks Fifth Avenue Toronto flagship on an early Saturday morning. Benoît Verdier, one of the three co-founders behind French perfume line Ex Nihilo, is here for a guest appearance, and the beauty hall sales associates are buzzing, excited to hear him speak before they open the doors to customers. It does feel like there’s a celebrity in the room, though no one is asking him to autograph their arms, something that routinely happens when he’s visiting Russia. “They are insane about fragrance,” says Verdier.

He orders a black Americano, presumably to counter his lack of sleep the night before; after flying in from Manhattan, Paris-based Verdier caught game 4 of the NBA finals, cheering for the Raptors, who he says are his favourite team in the league. (He became a fan after making several visits to Toronto for Saks, catching games and acquiring jerseys while he was in town.) He even sent a selection of fragrances to Drake and the OVO Crew. (FWIW the Raps’ global ambassador prefers Amber Sky).

Here, the practically Canadian Verdier talks about the brand’s perfume-mixing robot Osmologue, how to turn your favourite fall fragrance into a summer spritz, and why he wants Ex Nihilo to be the Tesla of the fragrance world.

This interview has been edited and condensed.

How did you meet your co-founders Sylvie Loday and Olivier Royère?
“I met Olivier in school, where we were studying political science. We met Sylvie through friends. Olivier and I had this long-time plan to work together on a project. We discussed it with Sylvie one night, and she said she was interested. It took us a year to prepare everything, without being paid, working in a small shitty office. So it sounds romantic but it was really tough. We’re really like a start-up company, [launching the business] from our garage. And then we had the chance to have a beautiful space in Paris on rue Saint-Honoré. It was really crazy because it’s a lot of money to invest, especially on that street. We’re next to Dior, we’re next to all the big names. Everybody was wondering ‘who are these guys, and how can they spend so much money?’ Ex Nihilo means ‘created from scratch.’ We love the idea of being outsiders. And it’s true that when we started the company, nobody was expecting us. We just popped up one day, from nothing, from nowhere.”

I read that some old guard perfumers dropped by to check out the store when it opened?
“Francis Kurkdjian came in. He was taking pictures and smelling everything. He was not very friendly, unfortunately. And I said ‘Hey, Francis, why don’t we do a collaboration together. That would be so cool.’ He looked at me [as if to say] ‘certainly not.’ Since then we’ve met again and now it’s cool. And all the big companies came by. You can recognize them. The head of marketing for Europe, and the head of innovation, they came together, and they took pictures with their phones. It’s very funny, because with the amount of money and power they have, why do they come to the small brands to take inspiration? Now you see the trend that all the niche brands want to become luxury brands because they want to evolve. And all the mainstream brands, they want to be niche. So they are creating a lot of private collections.”

You work exclusively with perfumers from Givaudan like Olivier Pescheux, and Quentin Bisch, who created your best-selling scent Fleur Narcotique. How do you decide which perfumers you’re going to work with on each fragrance?
Syvlie has a background in engineering and worked at Givaudan, so she made the connection with the noses. According to the olfactory category we want to create, we ask perfumers who specialize in that category. Other times it’s interesting to challenge them. For instance, Olivier Pescheux is very good with oud, and woody scents. So we might say, ‘Ok, Olivier, [this time] make us something super spicy.’ And sometimes they come with really fresh ideas. When perfumers work with us they don’t have any limits to costs for the materials, and we are very free in terms of the creative brief. They just have to respect the brand and what we want to do. Compared to a classic brief, it’s very funny. So they always accept because for them it’s a way to do something different, with less pressure.”

Tell me about the Osmologue, the perfume mixing robot?
“Fragrance companies like IFF and Givaudan already have this machine [in their labs]. But it’s much larger, and super expensive. At the beginning when we started to think about the brand, we knew that personalization was a mega trend in every market. You can personalize your coffee, you can personalize your sneakers, your car. It’s very, very mainstream. And one of the luxury categories that was really conservative about that was perfumery. So at the top of the pyramid you have Guerlain or Cartier. A custom fragrance from them is going to cost forty thousand dollars. It’s very complicated. But between that and the mainstream, there was nothing. So we said, we are quite influenced by technology and the French avant-garde, what could we do to propose this level of service to the customers? So we decided to downsize the machine, make it more it more efficient and more convenient. This [one at Saks’ Toronto location] is the only Osmologue in Canada. The others are in Paris, London, New York and Dubai.”

Discover the finest perfumery raw materials part of the EX NIHILO personalization program at 352 rue Saint-Honoré. The exclusive technology of the Osmologue allows the most accurate weighing and blending of the different ingredients involved in your SIGNATURE fragrance. See you there to experience the full demi-bespoke ritual, also available in London, Dubai, New York and Toronto!

How does it work?
“We start with the raw ingredients, the concentrates of fragrance and then we do all the steps exactly like in the laboratory. It was very difficult to do 100 per cent bespoke, so we’ve done demi-bespoke, which means we start with your favourite fragrance in the collection and then we can modify it according to what you like and according to your taste. Or according to the season. So if you like Fleur Narcotique, we can personalize it using the Osmologue with something that is going to be more fresh, or more woody or more floral. For instance if you want something for spring, we can play with orange blossom.”

Your packaging is art deco-inspired and has all these little details, like a tiny stamp of the Gallic Rooster, the unofficial national symbol of France.
“Americans have the eagle, we have the rooster. [laughing] We love to bring this art of detail in everything. The next step is to change the way you do luxury packaging. Because [currently when you look at the industry], it’s not very sustainable. If [other luxury brands] are like Bentley or Rolls Royce, I would like to push our brand to be something more like Tesla, because the philosophy of our brand is to innovate.”

Can you tell me about the fragrance launching this fall that’s inspired by musicians, and is reminiscent of the scent of vintage guitars?

“Yes Atlas Fever. It’s a creamy, very addictive scent. On top it’s vanilla and tonka bean. The more you roast the tonka bean, the creamier it gets. And then when it dries down you smell sandalwood and cedarwood, so it’s a bit smokey.”

Anything else in store for the brand?
“We’re launching hair mists [in Canada in July]. They don’t have too much alcohol, and they’re not too aggressive. And they aren’t flankers of an existing fragrance. It’s a new way to perfume your hair.”