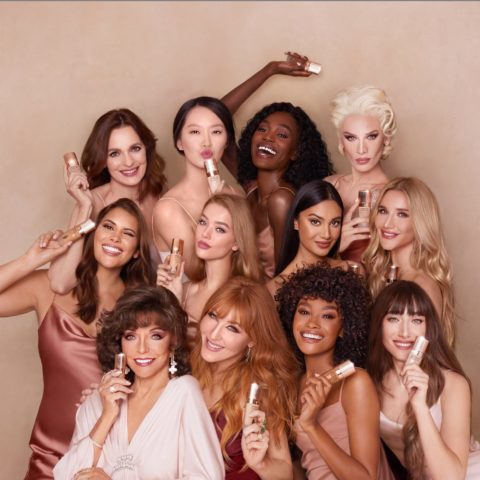 Darlings, just ONE MORE DAY until the launch of my NEW! AIRBRUSH FLAWLESS FOUNDATION and MAGIC VANISH Colour Correctors. These NEW! products are where MAKEUP MAGIC meets SKINCARE SCIENCE – I can’t wait for you all to experience the FLAWLESS FEELING ?✨???!! I LOVE this incredible shot from my Airbrush Flawless Foundation campaign. Featuring 60 GORGEOUS men and women, from @joancollinsdbe to @missfamenyc, @mypaleskinblog and @chey_maya!! #FLAWLESSISAFEELING – – #CharlotteTilbury #AirbrushFlawlessFoundation #New #ComingSoon #FoundationLaunch #Makeup #Beauty

At 86 years young, eternal icon Dame Joan Collins is still landing major beauty campaigns. True to the name of Charlotte Tilbury’s latest makeup launch, Collins looks flawless promoting Airbrush Flawless foundation—the brand’s third—among a cast of gorgeous faces. The superstar group also includes Miss Fame of Rupaul’s Drag Race, skin positivity activist Em Ford and model Chey Maya Carty. The product launched this week online and promises a wrinkle-reducing and moisture-boosting effect. “Whoever they are, whether it’s a Hollywood actress, red carpet superstar, doctor, journalist, CEO, or a working mother like me, everyone from 18-80 wants a foundation that stretches and blends with their natural skin tone and type, as well as helping to transform their unique skin-issues,” Tilbury said of the new formula. “Flawless is a feeling.” Amen to that.

MAC is gearing up to launch a new makeup collaboration this September, and it’s basically tailor-made for astrology-obsessed millennials. Pony Park is the result of a partnership between the makeup brand and K-Beauty icon Park-Hye Min, better known as Pony to her 5.2 million plus YouTube followers. “My collection with MAC is super meaningful to me in that I am able to bring K-beauty, Korean culture, and Asian beauty and culture to the global market,” Pony said in a statement. The 17-piece line echoes popular Korean beauty trends, like a lip mousse (for that blurred, gradient look) available in nine shades and a high-dimension skin finish (for a glass skin effect). Designed to mimic the look of tarot cards, the celestial-inspired line is set to hit MAC stores on September 23.

‘Thank U, Next’ Is Officially Becoming a Beauty Line

Beauty aisles are getting more and more star-saturated by the day. Ariana Grande is the latest celebrity to add her name to a seemingly endless list of recent announcements of beauty lines, marking Grande’s first real venture into the world of beauty with the launch of her ‘Thank U, Next’ fragrance (exclusively at Ulta) this week. Though not the singer’s first foray into fragrance—Sweet Like Candy, Cloud and Moonlight came first—her latest marks the beginning of a full-fledged cosmetics line. Grande reportedly trademarked ‘Thank U, Next’ for a host of beauty products back in April, and with the first product of that line now out in the world, ‘Thank U, Next’ beauty seems to be officially materializing. Ari fans, rejoice.

This week, Zoë Kravitz’s much-talked-about lipstick collaboration with YSL Beauté went live. There are three red and three nude shades (though only four shades in total are currently listed on the website) of Rouge Pur Couture designed by the actress. The packaging was inspired by YSL’s Black Opium fragrance—which Kravitz fronted in 2018—and the Big Little Lies star’s favourite YSL bags. Named for and inspired by the women in her life, Arlene’s Nude gets its name from Kravitz’s grandmother, Arlene Litman, while Scout’s Red is an ode to her dog, who wears a red bandana. “When you’re growing up, the women surrounding you will always have a huge influence on who you are,” Kravitz told Essence. “Watching these women be fierce, and unapologetically themselves helped shape who I am.”

Photography courtesy of Charlotte Tilbury
Get the best of FASHION in your inbox Thanks for signing up!
The latest fashion, beauty and celeb news delivered right to your email #FASHIONforall Now, check your inbox to complete your subscription
We won’t ever use your email address for anything else
Want even more FASHION? Follow us on social media.