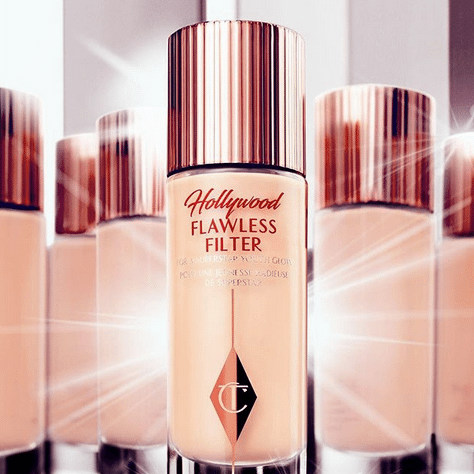 Charlotte Tilbury is always thinking about how to “steal DNA” from models and A-listers and bottle it for her customer; she’s described her product Wonder Glow as Gisele in a jar. Her latest launch, Hollywood Flawless Filter is inspired by Instagram filters as well as Jennifer Lopez, whom she’s worked with on album covers, Louis Vuitton campaigns and Vogue covers. Categorized as a “complexion booster”, it can be used either as a primer, mixed with foundation or as a highlighter. “I wanted something that when you put it on, it was literally like a filter all over your skin that instantly made you look younger, smoother, poreless, glowy, healthy, all in one product,” she said at the New York launch a few weeks ago. To date, it’s been worn by Laura Dern and Greta Gerwig at the Golden Globes, Salma Hayek at the BAFTAS and Emma Roberts and Zendaya at the Oscars.

But Tilbury knew she had something special before it came out based on how her clients and she herself were reacting to it back when she only had a small supply and was using it for red carpet events. “At one point I had one bottle, and I was like, ‘no, I need it, I’m older, get off. So I ended up giving people tiny little bits of it and then we ran out and we had to get more from the lab,” she says. But that didn’t stop the flurry of messages from clients telling her they couldn’t live without it, demanding to know when they could get it. Everyone, Tilbury included, can rest easy now that it’s in full supply and widely available. And now that it is, it’s already receiving high praise; Sali Hughes, columnist for The Guardian, has already proclaimed it the makeup launch of the year.

Photography via instagram/@ctilburymakeup
Get the best of FASHION in your inbox Thanks for signing up!
The latest fashion, beauty and celeb news delivered right to your email #FASHIONforall Now, check your inbox to complete your subscription
We won’t ever use your email address for anything else
Want even more FASHION? Follow us on social media.