Top Fall Fashion 2015: Our complete guide to the top 10 trends of the season

While you’re out and about eating ice cream, running through splash pads and enjoying balmy nights on a patio, we’re in the office (iced coffee on deck) compiling the best Fall 2015 trends our editors saw in Paris, London, Milan and New York.

Whether wispy swathes of fabric, heavy-duty layers or pretty much an elevated Snuggie, capes and ponchos were a main player on the runways, as seen at Lemaire, Chloé and Céline.

We’re saying buh-bye to the 1970s and hello to the ’80s, thanks to designers like J.W Anderson (insert a million heart-eyed Emojis here). We also discovered that elaborate ruffles and delicate lace, evocative of Queen Victoria’s 19th Century reign, are all the rage ATM.

Geometry class was in session, with collections relying heavily on the use of kaleidoscopic prints, exaggerated angles and out-of-this-world shapes. There were also many DIY looks, from crafty baubles at Stella Jean, to doodled-up dresses at Dolce & Gabbana. Paging Bob Ross and Neil Buchanan.

When it came down to the accessories game, necks and legs were considered prime real estate. From massive pearl necklaces to thigh high boots, designers ensured every square inch of skin was fully utilized. Read: Stella McCartney and Christian Dior.

Lastly fur abounded—surprise!—ranging from conventional (fluffy toppers at Louis Vuitton, Sacai and Michael Kors) to unorthodox (Gucci’s hirsute loafers that would give Cousin Itt a run for his money).

The list goes on, but you’ll have to continue reading to find out which trends we’re on board with this season.

Over the past few seasons we’ve watched as designers drew inspo from both the 1970s and 1990s, totally overlooking the awesome ’80s—like that one Hanson brother whose name we have trouble remembering. And while some still took from the ’70s this season, we’re overjoyed with the numerous shows that looked to the ’80s.

At Versace, Donatella sent models down the runway in skin tight, sequin-embellished dresses, as if they were headed to a Beverly Hills pool party straight out of a Bret Easton Ellis novel. Likewise at Balmain, where frilly, jewel-toned dresses were paired with pointy-toed pumps. On the flipside, Saint Laurent channeled major Madonna vibes with mini-crini frocks, topped off with blazers and ripped tights.

But the most authentic manifestation of ’80s style came from the genius mind of Jonathan Anderson, who took to the decade with an avant-garde approach. The J.W. Anderson show was full of Andie-Walsh approved looks, replete with exaggerated shapes, slouchy knee-high boots and metallic lamé. At Loewe, Anderson played with proportion, layering broad shouldered cardigans over flesh-toned turtlenecks, and marrying them with oversize tweed trousers and goggle-like glasses. BRB while we listen to some Kraftwerk.

It shouldn’t come as a surprise that fur abounded at the shows—and in all shapes, sizes and colours. We saw mammoth-sized coats in a bevy of hues, from lilac at Marques Almeida, turquoise at Michael Kors and multi-coloured at Sacai. Then there were the fluffy white toppers that made the rounds at Louis Vuitton, as well as at Stella McCartney, who used faux fur.

Naturally, there were stoles. And the bigger the better. Take Altuzarra for example, where models donned coats with exaggerated fox fur collars (did we mention the collection also featured a baby pink chubby?)

Fur also cropped up in unexpected places: Ombré pelts were adhered onto coat pockets at Marni, a red fur “bralette” was wrapped overtop a mini dress at Giambattista Valli, and at Balenciaga, ladies-who-lunch pumps were trimmed in fuzz—the antithesis to Céline’s groundbreaking Fur-kenstock from season’s past. Speaking of Céline, the French house showcased massive pom-pom scarves, and over in Milan, Gucci was all about the hair down there—and by that we obvi mean the hirsute, Horsebit loafers. No Swiffer? No problem!

Finally, although we were so down with the bumpin’ Spice Girls soundtrack (#GirlPower) and the adorable children at Dolce & Gabbana, it was really the selection of shaggy headphones that stole our hearts. Must-cop.

From sexed-up siren looks that leave little to the imagination to menswear-inspired suits that break the glass ceiling, when it comes to this season’s style, designers prove there’s room to experiment with both sides.

While the ladies of Balmain and Altuzarra strutted down the runways in their lace pin-ups that exuded both power and sex in a tasteful manner, Miuccia showcased an array of professor-worthy power suits alongside cotton candy-coloured dresses at Prada.  And nothing says power dressing like a classic white shirt. Donna Karan and Michael Kors strayed away from the crisp, fitted shirts and instead opted for oversized versions teamed with the nine-to-five go-to: a black midi skirt. When it comes to dressing for success this season, rules are broken and lines are blurred. Be it tailored lines or feminine hourglass silhouettes, Fall 2015 is about having the power and freedom to dress as you please.

If there was one lesson we were taught last fall it was to ensure our scarf game was on point (and well-documented via #OOTDs). And we were down for it because a) it’s user-friendly and easy to rock; b) it’s versatile in the fact that it offers added insulation when needed; and c) our office gets nippy, OK?!

Lucky for us, capes and ponchos made several appearances on the runways: Kenzo showcased sporty, cape-like jackets in luxe fabrics, and endorsed the blanket look, with models wrapped in large, striped swathes of fabric. At Emilio Pucci, a sleek leather cape complete with long strands of fringe was the main attraction.

Designers also experimented with bulkier textiles and patchwork, as seen on the hefty ponchos at Dsquared and Chloé. Rifting on the house’s monogramed blankets from last fall, patterned ponchos—whipstitched and trimmed in fringe—were draped over shoulders at Burberry.

A nearly floor-grazing scarf in grey tweed completed a sophisticated look at Lemaire, while the regalia at Simone Rocha included a wide tapestry cape in vibrant red. Finally, at Céline, one model was swaddled in what appeared to resemble an elaborate silk comforter, because why the hell not? Scarf goals are very real, people.

The past few decades may have been a pool of inspiration as of late, but for Fall 2015, clocks were turned way back. Think Queen Victoria’s 19th century reign. Taking a cue from the history books, designers upped the drama in terms of materials and aesthetics.

Majestic fabrics and rich tapestries were also a source of inspiration this season. While Givenchy and Alexander McQueen experimented with hauntingly beautiful designs and antique-inspired hems, Valentino and Alberta Ferretti showed off elaborately embroidered pieces and elegant textiles that scream royalty.

Geometric fashion was a major trend at the shows, with designers relying heavily on shapes, angles and prints, making us feel like we were back in school.

Known for his calculated cuts, artful draping, and well-maintained mane, Rick Owens regaled us with his signature architectural approach to fashion: sharp pieces of fabric protruded from vests and dresses.

Additional visual aid was provided by way of geometric prints, yielding dizzying results. A strange amalgamation of checkerboard and stripes were sent down the runway at Valentino. At Issey Miyake fabrics were stamped with multi-coloured, kaleidoscopic prints and manipulated into kooky shapes. A loud zig-zag print served as a motif at Christopher Kane’s show in London, and in Paris Junya Watanabe wowed us with the three-dimensional hexagonal pleating, reminiscent of honey combs, seen on dresses, capes and scarves. We love a good, Escher-inspired print, and Karen Walker delivered, with trippy mini dresses that we need right now!

Get your crafting kit and paintbrushes out: DIY fashion is a thing for Fall 2015, with designers employing crafty techniques like appliqué and embroidery.

At Rodarte, a combination of ostrich and marabou feathers were applied onto layered gowns, and at Mary Katrantzou bodices were moulded into seamless forms, while belts were constructed using pink foam. 3D hearts popped off of skirts and turtlenecks at MSGM and at Delpozo, knee-high boots were given an extra kick with the addition of appliqué cutouts.

In Milan, embroidery was big. Multi-coloured tassles dangled off of jackets, socks and bracelets at Stella Jean, and flowers and birds were stitched onto sweaters at Gucci. And then there were the bags at Dsquared, covered in fringe, feathers, studs and beads.

But the finale dresses at Christopher Kane and Dolce & Gabbana really took DIY fashion to the next level. At the former, slinky dresses were constructed out of printed panels depicting nude bodies (if you haven’t already seen FKA twigs’s get-up at this year’s Met Gala then what are you doing with your life?). And at the latter, messy child-like doodles of trees, flowers, houses and rainbows were painted on dresses to go along with the collection’s motherhood theme.

Cooler temperatures may call for bundling up from head to toe, but if the Fall 2015 runways say anything, it’s that legs are taking the starring role this season.

Slit-up-to-there skirts and mini skirts will be bearable this season, thanks to the abundance of designers upping the haute hosiery game. If you’re planning to brave the cold, work the leggy look in statement tights à la Proenza Schouler or channel your inner rock star with ripped versions at Saint Laurent.

In need of extra warmth? Then look no further than the second skin over-the-knee boots at Dior and Marc Jacobs. With the temperature sure to drop in the fall, the more sensible (and sexier) footwear choice will no doubt be our best friend.

Red and orange made a comeback for the second year in the row, with the addition of yellow to complete the complementary colour wheel. Though dark shades are usually favoured in fall and winter, with citrus hues flashing down the Fall 2015 runways, who wouldn’t be tempted to wear the fiery tones of red, orange and yellow to stand out from the sea of grey and black?

Red was truly the more popular pop of colour this season, ranging in darker hues at Calvin Klein and Lanvin to more vibrant shades at Carven and Christopher Kane. A slew of orange citrus also marched down the runways of Fendi, Victoria Beckham and Moschino, but it was the yellow that really stood out. Like a lightning rod in the night sky, a spark of yellow gave life to many black and grey-heavy collections. Case in point: Hermès showed a selection of red and black looks, but the singular yellow top and skirt combo was the one that attracted everyone’s attention. The same goes for Miu Miu. Although the designer house’s Fall 2015 collection was like a box of Crayola crayons had exploded on the runway, it was the striking yellow croc coat that got heads turning.

It’s almost time to bid farewell to summer’s V-neck cuts and exposing crop-tops, because come fall, covering up your neck with bold scarves, chokers and statement turtlenecks will become the most stylish way of preparing for the crisp, autumn air.

While Stella McCartney showed off a collection of unraveled, yet structured silhouettes with its twisted pearls, Lemaire took a different approach, covering models necks with a unique hybrid between a turtleneck and choker, both proving that for Fall 2015, the neck is where it’s at. Gucci threw a modern twist on feminine neckwear, bringing back the ’80s-inspired pussycat bow, and personifying the Gibson Girl, feminine ideal of beauty with its dainty, floral-embellished bows. 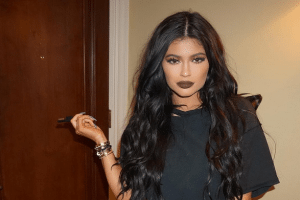 5 Lip Colours to Try This Fall That Aren’t Plum 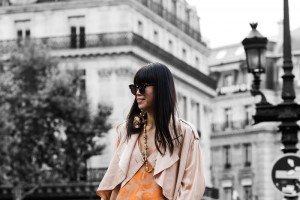 How to wear the pyjama trend: 3 ways to look like you rolled out of bed, but better 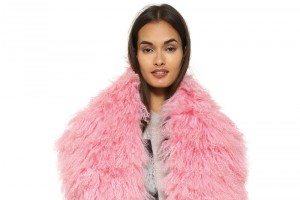 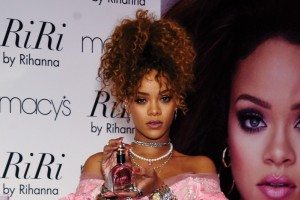 Charting the massive ’80s trend on the runway and red carpet 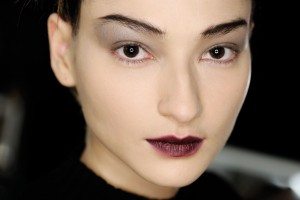 Every single way to wear this season’s dark lips trend 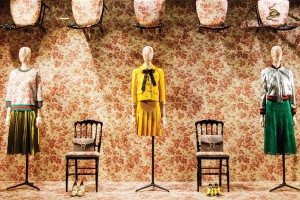 Grandma’s couch: The unexpected inspo for this season’s textile trend 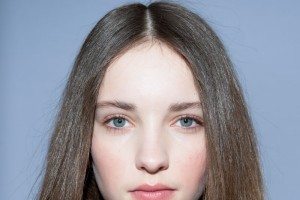 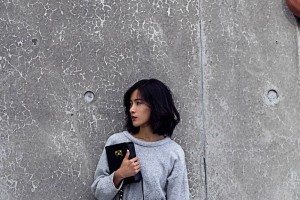 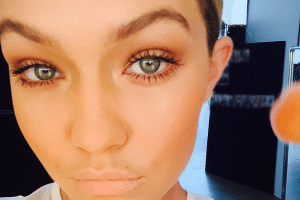 The new fall beauty rules, according to our favourite celebs 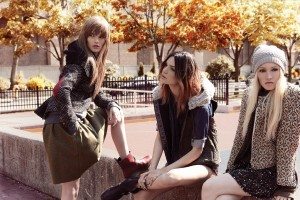