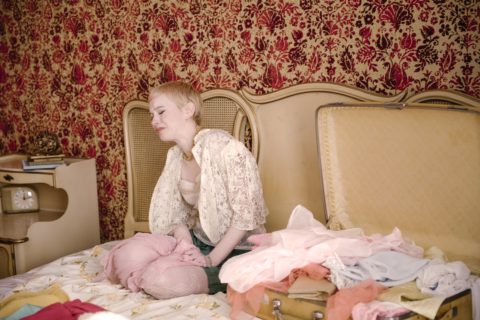 She calls it an exercise in "raw emotional vulnerability."

“At least three people broke up with their boyfriends not long after we shot them for this project,” says Toronto-based photographer Caitlin Cronenberg. The “project” is a glossy coffee-table photo book celebrating a not-so-glossy subject: breakups.

The Endings, a collaboration between Cronenberg and art director Jessica Ennis, was shot as if the camera was one-half of a couple breaking up. Actresses like Julianne Moore, Mena Suvari and Danielle Brooks stepped in to take on the roles of the spurned, embodying women whose dramatic dissolutions end in acceptance, fear and contentment, respectively. The book is an exercise in what Cronenberg describes as “raw emotional vulnerability.”

Raw it is. The photos contain an unrepentant darkness that can also be found in Cronenberg’s father’s films. (Her dad is legendary horror-movie director David Cronenberg.) Women do terrifying things in this book, including clutching at a still-throbbing heart and taking scissors to an ex-lover’s clothes. Cronenberg and Ennis say that many of the stories depicted in the book either happened to them directly or they heard about them through friends. (The garment slicing came from a story told to them by American Psycho director Mary Harron, who wrote the foreword).

If a book dwelling on the emotional drama around breakups sounds, well, a tad regressive, Cronenberg and Ennis assure you it’s not. “It [was] important that it not just be a book of women crying,” says Ennis. “We definitely wanted to show that our characters could be strong and vulnerable at the same time,” adds Cronenberg. The emotions captured in the images run the gamut from numb listlessness to searing rage to cautious hopefulness and, perhaps, catharsis.

“So often, we don’t really explore endings; the end is just the end, and we move on in storytelling,” says British actress Gugu Mbatha-Raw, who was photographed for the book in the role of a woman whose instincts suggest that her partner might be cheating. “I was drawn to the idea of dwelling in that space.”

Indeed, most narratives surrounding romantic relationships tend to focus on origin stories. Meet cutes supposedly give way to “happily ever afters.” But the latter is hardly a foregone conclusion. Cronenberg and Ennis wanted to give women space to find themselves in the fallout. As Ennis says, “No one gets off unscathed.”

The images have the cinematic quality and narrative richness of a short film. Mbatha-Raw says that this is because Cronenberg acted as both a director and a photographer. “She was like, ‘What if you just discovered something in his drawer? What if you found something like a blond hair in your bed?’” Cronenberg may be the heir to a filmic dynasty, but she says she chose still photography as her medium because “just looking at one image can bring you as many emotions as watching an entire film.”

The premise of The Endings feels unique because it treats women’s sometimes implausible emotional responses with empathy rather than twisted exasperation—unlike, say, Fatal Attraction. In Cronenberg and Ennis’s world, women aren’t crazy—they’re merely flawed. Once a relationship ends, women in particular are expected to sweep up the broken bits, put them in the garbage and leave it on the curb for morning pickup; instead, The Endings allows them space to revel in the breakdown.

The Endings is available for purchase at Indigo at Amazon now.