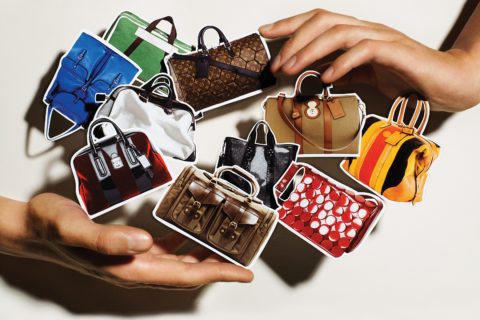 The latest designer knock-offs are contributing to tax evasion, human rights violations and even terrorism.

I arrive at what appears to be a vacant storefront near Toronto’s Wychwood neighbourhood. The windows are papered over, and there’s no sign on the door. But the door is unlocked, so I tentatively enter a room lined with large plastic bins crammed with a veritable Willy Wonka’s Chocolate Factory selection of designer goods: fur-lined Gucci mules, crystal-encrusted Christian Louboutins and a rainbow’s worth of Valentino “Rockstud” pumps. A narrow corridor leads to another room with floor-to-ceiling shelves overcrowded with Chanel, Saint Laurent and Céline purses. None of them are the real thing.

To gain access to this secret depot of luxury fakes, you need to be referred by a previous customer. Ava*, a 27-year-old entrepreneur who has been shopping here for the past two years, told me about the place. I’m not the only one here on this rainy Thursday afternoon. A mother urges her daughter to decide which Chanel bag she likes best. Across the room, a woman is trying on shoes with the proprietor of the business, a tanned blonde who appears to be in her early 40s. I recall the conversation I had with Ava about her. “I don’t know her name,” she told me. “We all have her in our phones as ‘Bag Lady.’”

The quality of counterfeit products has always ranged from bags that practically scream “Channel” beneath interlocking Cs to borderline-indistinguishable Hermès fakes that cost $2,000 (instead of $20,000 for the real deal). The goods on offer at the Bag Lady’s store range between $350 and $1,500—a fake Louis Vuitton tote, for example, will run you close to $700. According to Rania Sedhom, a lawyer with the Bespoke Law Firm in New York who counts Moda Operandi and The Luxury Marketing Council among her clients, some counterfeiters today can produce fakes that are good enough to elicit a double take, instead of an eye roll, from discriminating purse hounds. They typically buy the original designer bag first, she says, study it in order to replicate it and then source high-quality materials from the same leather mills that supply the designers. Not only is the leather of some high-end fakes super-creamy but the advent of 3-D printing allows counterfeiters to create an exact prototype of what appears on a real designer bag and mass-produce it. Fakes are also becoming easier to buy. Sedhom claims that a retailer you’ve never heard of might pop up on Instagram or Snapchat with a link to a website claiming to sell authentic merchandise with a convincing backstory.

“Once they get a ‘cease and desist’ letter, they’ll shut down, open under a new name and then continue to sell their merchandise,” says Sedhom. She suggests steering clear of sites where you’re buying directly from an individual. Instead, she recommends sites like The RealReal, which authenticates all merchandise before putting it up for sale.

Some luxury brands are smoke bombing counterfeiters by embedding radio-frequency identification (RFID) chips, which are the size of a grain of rice, into their products. The technology uses electromagnetic fields to identify and track the whereabouts of an object. RFID chips are beginning to gain traction in the United States but less so in Europe, where stringent privacy laws forbid tracking people without their knowledge and consent. In theory, customers can use their smartphones to scan the RFID chips and authenticate their purchases. Exactly where the chips are embedded is harder to say—companies often change the placement to make it more difficult for counterfeiters to replicate the products.

For Ashlee Froese, a fashion and branding lawyer at Fogler, Rubinoff LLP in Toronto, buying counterfeit items—whether they’re good fakes or not—isn’t the biggest issue. She wants consumers to be aware of the dark side of the business. Since these bags are illegal, she says, it’s unlikely that the owners of the factories in which they are manufactured pay attention to upholding workers’ and human rights. And it’s even more unlikely that these businesses are coughing up taxes on these illegal goods, which means less money is going toward essential infrastructure like roads, education and health care. According to some press reports, the Canadian counterfeit market is worth $20 billion to $30 billion. The scariest part of buying fakes, adds Froese, is that law enforcement has linked the illegal profits to international terrorist organizations.

When I asked Ava why she and her friends would rather purchase fakes than save up for a real bag, she answered, “I guess it’s because we’re all so impulsive.” Counterfeits are a form of short-term gratification: You get to wear the It item while it’s still cool but don’t have to pay the full price.

The fakes in the Bag Lady’s sketchy shop are convincing—at first glance. But when I take a closer look, there’s something slightly off. The gold and silver designer logos haven’t been stamped hard enough, so they’re almost floating atop the leather. My eye gravitates toward a pair of silver-foil Gucci loafers, but I don’t try them on, let alone make a purchase. The downsides—both human and legal—to purchasing a fake concern me, and so, too, does the hollow feeling of inauthenticity that they elicit. There’s a thrill to wearing a recognizable logo—I get that—but if it’s a fake, taking pleasure from the artifice may come with its own karmic shadow.

*Name has been changed