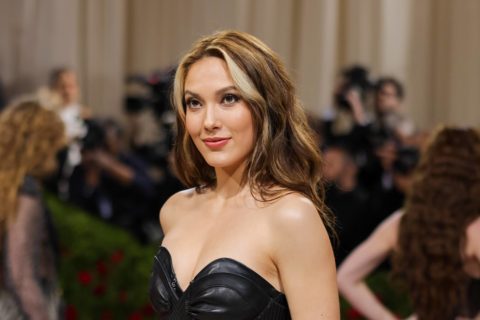 The Olympic athlete went viral after walking the red carpet.

Leave it to the Met Gala to bring together all the Kardashian-Jenner ladies, cast members from Bridgerton and Euphoria, and some of music’s biggest names (Lizzo topped all of our best dressed lists, if we’re honest).

A guest list this glamorous is no accident. Anna Wintour’s pride and joy (outside the pages of American Vogue) is all about creating viral moments. And while there was plenty of fabulous fodder on the steps of the Met, it was one guest in particular that set social media ablaze (and no, it wasn’t Kim Kardashian and her grand entrance in Marilyn Monroe’s “Happy birthday, Mr. President” gown).

American-born Olympian Eileen Gu went viral on China’s mega-popular microblogging site Weibo after walking the Met Gala red carpet. In her second appearance at the fundraising gala, the Olympic gold medalist freestyle skier and model was one of the most talked about topics on the Twitter-esque social media platform. In a matter of hours, the hashtag #EileenGuMetGalaRedCarpet had some 250 million views, according to CNN.

So, who exactly is Eileen Gu?

While she started her career competing stateside, the 18-year-old athlete traded in her Team USA uniform to ski for China (her mother’s home country) ahead of the 2022 Winter Olympics in Beijing. There, she won gold medals in big air and halfpipe, as well as a silver medal in slopestyle, making her the youngest champion in freestyle skiing.

But when she’s not hitting the slopes, Gu is gracing the covers of the Chinese editions of Harper’s Bazaar, Elle, Cosmopolitan, GQ and Vogue, to name a few. She’s also been featured in campaigns for Fendi, Gucci, Tiffany & Co. and Louis Vuitton, and is a founding member of the VS Collective.

This all takes us back to her viral Met Gala appearance. Per CNN’s reporting, her Louis Vuitton look was praised by many Weibo users. One of many all-black get-ups seen on the red carpet, Gu wore an archival black leather dress from the Spring/Summer 2017 collection, leather belt and gloves from the Cruise 2022 collection, and suede black boots from the Spring/Summer 2020 collection. And she was in great company, with the Louis Vuitton squad including HoYeon Jung, Emma Stone, Phoebe Dynevor, Chloe Grace Mortez, Cynthia Erivo, Sophie Turner and Joe Jonas and Emma Chamberlain, among others.

After an eventful night, Gu made an appearance on the Today Show this morning (May 4), bringing the attention back to her love of skiing. “I always said my message is about inspiring young girls and inspiring more people to hear about the sport and to use it as a force to create interconnection across and cross-cultural communication,” she said. And with her viral Met moment, we say mission accomplished!