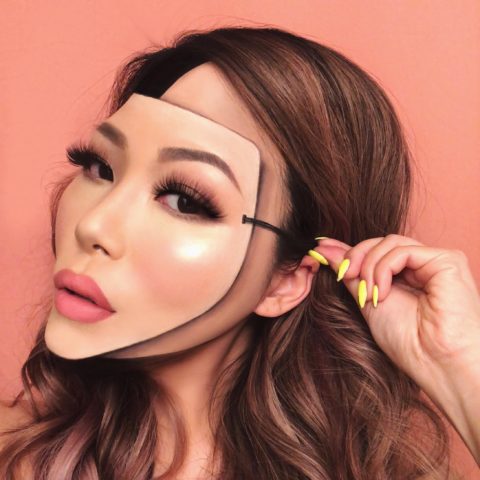 Five years ago, Mimi Choi was working as a preschool teacher in Vancouver. Last week, she created Ezra Miller’s show-stopping multiple eye makeup look for the fashion industry’s most important event of the year, the Met Gala. If camp is all about transformation, Choi’s own story is the ultimate homage to the genre. Today, the Vancouver-based makeup artist has over 1.1 million avid followers on Instagram, the platform from which she showcases her signature illusionist looks.

We caught up with Mimi over the phone to get the scoop on what it was like to craft one of the year’s most memorable makeup looks, where she finds inspiration for her otherworldly creations, and the transformative power of hard work and dedication.

What was it like for you to have the opportunity to create that look for the Met Gala?

Multiple eyes is something that I created in 2014 and it’s one of my first looks that went viral. To be able to create that look on Ezra and to present it on a larger stage was very meaningful for me. One of the first things I had to think about when I knew I was going to do his makeup was how it was going to last. When he went into the Met Gala, makeup artists are not supposed to be in there. My major concern was making sure that makeup lasted, so I used a lot of stable products and I set it really well with Green Marble before and after, as a sealer and a primer, and then used the sealer three times after. The makeup actually lasted more than 24 hours. I had to start at four in the morning because we had photoshoots at nine-thirty in the morning, and the event wasn’t until seven-thirty in the evening. He had to go into the Met Gala looking fresh and then last until the afterparty, which is like 3 in the morning. I was very happy that when he came back, he still looked fresh. That was the biggest challenge.

How did Ezra find you?

It was through his publicist. When they were coming up with that camp look, she realized that I would be the perfect fit because my makeup, to her, is very camp. She told Ezra about me and Ezra had been following me for a while. When he called me, I kind of already had an idea of what I wanted to do. A lot of my illusions are angle-based, and for a red carpet event, I want to make sure it translates into the camera from all angles. In my mind, eyes would be very good because it looks beautiful and it looks like eyes from all angles. When he approached me, we actually had the same concept in mind. I did a kaleidoscope face last year, and Ezra was saying that he loved that look—that it would really suit his outfit. So the concept was actually based on and inspired by my kaleidoscope look, and it just kind of evolved from there. We didn’t have a complete trial, so we figured out the pattern spontaneously, on the day of at four in the morning. That’s what my art is all about. I love spontaneous art. Ezra is also very creative and open to everything and he was very into it.

What was the story he was trying to convey?

He wanted a mask of his actual face. Underneath, he wanted to convey different layers of himself. Eyes are a symbol of the different emotions and different versions of ourselves. Each one of us has many different layers, but we don’t show them to the world. He thinks that camp is a transformation that we have to go through at least once and according to him, it’s like a funeral. As soon as you walk into an event, the idea is gone. When we came up with the eye concept, it was to convey the different layers of human beings, personalities and emotions.

Do you have a fine arts background?

I don’t. It’s all through trial and error. I was actually a preschool teacher five years ago. Before that, I never thought I would be an artist. I went into makeup because being a preschool teacher didn’t make me completely happy. I love children but I felt like a side of me was suppressed. I decided to try out and pursue another passion, and at the beginning I thought I would be more into beauty and fashion. Going to Blanche [MacDonald Centre] was great for me because that program made me realize makeup is so much more than beauty. What made me realize that I was really into illusion makeup was the special effects and prosthetic classes. I was able to create characters through makeup. I always trust my eyes, because we as people have been looking at things for so long. We know what looks off and what doesn’t look off. I would observe real objects and try to improve that area each time. The first few years was really a lot of practice and just trying different shading and highlighting to understand it. Being so passionate and it being a hobby really helps because I love to paint and it makes me happy to paint. It doesn’t happen overnight. A lot of people think you’re born with a gift. I think every one of us has a gift but it’s whether you feed into that gift and continue to push to improve on it. My skills did not come overnight. It’s through every day working hard.

Where do you find inspiration for your ideas?

From my emotions, from paintings, from photography, from music, from Photoshop art… Sometimes I look at really cool Photoshopped art and think, “can I do that with makeup?” One of the sources [of inspiration] that people find really interesting is my sleep paralysis. I have a very severe case of it where I’m not only trapped in my body but I hallucinate. I see a lot of very scary visions, like people with no faces, people chopped up, people with a hundred fingers trying to grab me, a tall dark shadow…. It happens pretty much every week and it was not until I started to paint the things I see that I realized when I paint them, I don’t dream that specific vision anymore. I dream something else, but that vision is gone. A few years ago, I started drawing spiders because I saw a lot of spiders in my sleep crawling all over the walls when I was going through sleep paralysis. I drew a spider out on my lip, trying to remember the details of the spiders I had seen, and after that, I did not dream about spiders. Not even once. Makeup in a way heals me, so it’s really cool that everything that I thought was a hindrance to my life was actually a blessing in disguise.

How do you think Instagram as a platform has changed the game for makeup artists?

Instagram has been a huge help to me to share my art. When I first started out, I wasn’t really looking for fame or anything. It was just a way to document my growth and progress, and a way for me to keep track of my illusion makeup. Also, in my mind, I was thinking if I can do a good illusion makeup, I can do a good grad makeup, I can do a good bridal makeup, I can do a good winged liner easily. I teach now, too, and I always encourage students to just take photos of your progress and utilize Instagram. When you click on somebody’s layout, you can see all the visual work that they do, so I think it’s the perfect platform for artists to showcase their work. There are also downsides. I see a lot of students being too concerned about likes or starting to compare themselves to other artists. A lot of people get stuck in recreating other people’s looks, and they forget that it’s more important to create your own style.

Isamaya Ffrench—I love her work. I also like Vlada. She does really creative lip art. I interact with a lot of my makeup friends but I mostly look at surreal art pages and photography pages on Instagram, like Visual Atelier.

What are some of your favourite looks you’ve created over the years?

The shelf face, where I painted my face into different shelves and put objects in it. That was meaningful because I put my favourite objects inside the shelves, and I explained why I chose those objects. Kaleidoscope face meant a lot to me because, again, multiple eyes is one of my signatures and one of my favourites to do because eyes take a lot of time to make sure it looks realistic. My recent wolf look I really enjoyed doing, but it changes all the time.