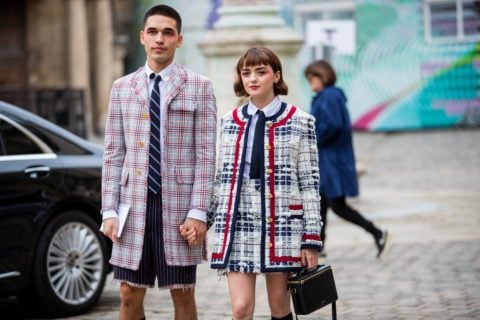 These are the beauty moments we live for

This weekend, Thom Browne presented a fantastical collection during Paris Fashion Week. The show had no shortage of drama thanks to the larger-than-life wigs and headwear paired with huge skirts. And yet, something caught our eye off the runway – specifically Game of Thrones star Maisie Williams and her boyfriend Reuben Selby.

Not only was the pair sporting coordinating outfits (right down to the perfectly mismatched socks) reminiscent of a Gossip Girl episode, they also wore matching makeup.

Sitting front row, both Williams and Selby (an entrepreneur who owns a modelling agency with his brothers) had a sweep of bright coral eyeshadow across their eyelids. And it looked equally cool on both parties.

This is the second time this year that the pair has adopted the same glam look – when Maisie dyed her hair pink earlier in the year, Selby followed suit. Furthermore, the couple is also known for their coordinated sartorial efforts, having previously rocked his-and-her ensembles at Sophie Turner and Joe Jonas’ wedding.

white party for the bride and groom ?

Men’s makeup is having a major moment of late, largely led by Ezra Miller whose turns on the red carpet are nothing short of inspiring. In September, Paco Rabbane announced that a genderless makeup line was in the works (no release date was shared but it is thought that it will be sometime next year), following in the footsteps of luxury giant Chanel, who released a Chanel Boy collection of cosmetics last year, and Tom Ford.

Photo by Christian Vierig/Getty Images
Get the best of FASHION in your inbox Thanks for signing up!
You’ll get the latest fashion, beauty and celeb news delivered right to your email Now, check your inbox to complete your subscription
We won’t ever use your email address for anything else
Want even more FASHION? Follow us on social media.