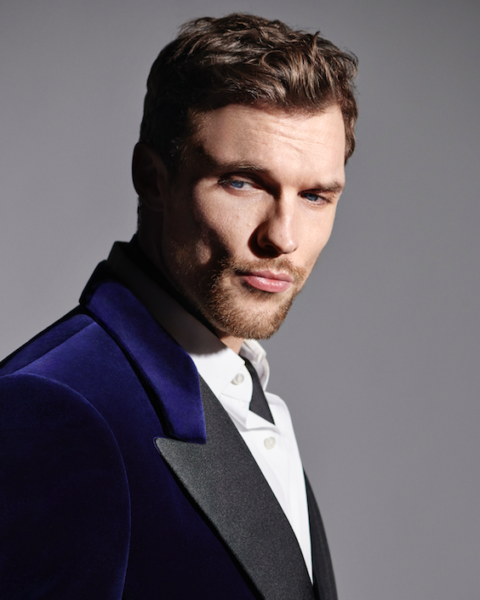 "We've been taught to be lone wolves, that it's not OK to cry or show fear, and that we must fight with aggression rather than empathy. These are all outdated [notions] that we should challenge."

British actor Ed Skrein is most well-known for his roles in Game of Thrones, the superhero feature Deadpool and the war flick Midway, which might explain why he’s garnered somewhat of a macho reputation. However, he wants you to forget everything you think you know about him.

We caught up with Skrein to chat about one of his latest roles outside of film — starring in the ad campaign for the Carolina Herrera fragrance, Bad Boy, alongside Karlie Kloss (who is the face of the brand’s Good Girl fragrance).

Below, Ed Skrein tells us why he’s over outdated notions of masculinity, why crying feels so good and the feeling he wishes he could capture in a scent.

What drew you to the Bad Boy fragrance?

I was immediately attracted to the freshness and the deep, dark sensuality of Bad Boy. It makes me think of my good and bad sides. I was very interested in the message Bad Boy conveys, because it goes beyond the perfume. It captures men’s contradictions and encourages us to embrace all our facets. It represents the duality of masculinity. Men can be strong and also sensitive and caring.

The scent plays with the idea of contrast and uses both traditionally masculine and feminine scents.

The warmth and masculinity of the tonka bean notes (which are also in Good Girl) in the woody scent are combined with unexpectedly fresh notes, creating contrast.

You said in a recent interview that the fragrance campaign offers a chance to show a new type of masculinity and that “if this was a campaign for a bad-boy fragrance in the Nineties, it would be a very different energy, a very different tone.” What do you think it might have been like in the ’90s? What makes the current time so different?

Masculinity is evolving. [There’s this long-standing idea that] men should provide, and we should be strong for our family and friends. But the women in my life also provide. The women in my life are also strong. Traditionally, we’ve been taught that emotional expression is not what a real man does, but expressing emotions is always liberating. We’ve been taught to be lone wolves, that it’s not OK to cry or show fear, and that we must fight back any threat with aggression rather than empathy. This is all false. These are outdated [notions] that we all should challenge.

What emotions does Bad Boy evoke in you?

For me, being a bad boy means embracing our duality: our power and our emotions. Bad Boy represents our dark side and our uniqueness. There are no two identical bad boys.

How have you turned to fragrance to lift your spirits while at home this past year?

Even while at home, scents connect us to a moment or a place or person. The Bad Boy frame of mind means trusting your intuition, without forgetting to have fun.

What is a scent that you wish you could bottle up and wear?

I love autumn and I really like fragrances that reproduce that autumn feeling.

You recently said you were excited by the challenge of shooting a fragrance campaign and making it “an interesting project, and not just some soulless endeavour.” Can you elaborate on that?

I was interested in the message Bad Boy conveys. Working with Santiago & Mauricio, the directors of the film, was such an enjoyable experience. The ad is electrifying, and Karlie [Kloss] is a powerful but gentle force of nature. Watching her in front of the cameras was amazing.

Photography by Paul Maffi for Carolina Herrera Fragrances
Get the best of FASHION in your inbox Thanks for signing up!
You’ll get the latest fashion, beauty and celeb news delivered right to your email Now, check your inbox to complete your subscription
We won’t ever use your email address for anything else
Want even more FASHION? Follow us on social media.