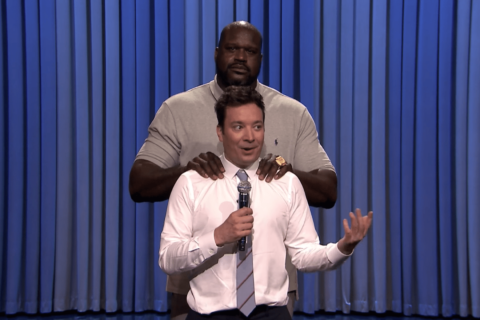 Jimmy Fallon has done Lip Sync Battles with a range of funny people—from Kevin Hart to Emma Stone to Melissa McCarthy—but he was lacking a bit in the athlete department. That is until the one and only Shaquille O’Neal took to the Tonight Show stage. The seven-foot-one former basketball star busted many a move onstage, and whatever he lacked in lip sync talent he made up for in spontaneity. He chose to “sing” the 1988 “My Prerogative” by Bobby Brown, pulling up a member from the audience to wind and grind with only to gently push her aside to make way for—wait for it—Mr. Worldwide, a.k.a. Pitbull.

Fallon was not impressed with this tactic, deeming it totally unfair. So he took it upon himself to up the ante by singing a duet all by himself: Ariana Grande and John Legend’s rendition of “Tale as Old as Time” from Beauty and the Beast. To make this work, he slipped on a two-sided costume: one side had an Ariana Grande-esque ponytail, slouchy jacket complete with ballgown bottom; on the other was a suit and short hair, à la John Legend and the Beast—sort of.

The icing on the cake is Shaq’s and Fallon’s duet, where there’s a bit of butt smacking and cheek kissing. Who does what? Watch and find out.