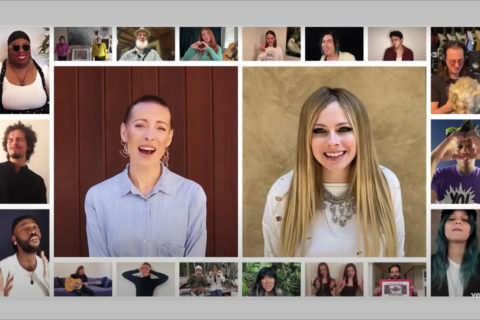 ICYMI: These Were the Highlights From the Stronger Together Concert

From a tribute to Nova Scotia to a very special message from Drake, here's everything that went down.

The largest single-show broadcast in Canadian history, Stronger Together, Tous Ensemble brought together the biggest names in the country, from actors and athletes to musicians, authors, activists and more. The special event honouring healthcare workers and raising money for Food Banks Canada featured musical performances, messages of hope and solidarity, and also told the stories of frontline workers and COVID-19 survivors. Now, we’re reliving some of the highlights from the show.

Canadian rocker Sam Roberts kicked off the show with an uplifting acoustic rendition of his 2014 single “We’re All In This Together,” with his three children accompanying him on music. Celine Dion addressed viewers in French and English, praising the “heroes out there around the world who are going to work every single day.” Other celebrities who made an appearance include author Margaret Atwood; dance troupe Cirque du Soleil’s Kevin, Andi and Gasya Atherton; actors Mike Myers, Will Arnett (with a special appearance by Amy Poehler) and Kiefer Sutherland; and the entire cast of Schitt’s Creek.

The goal of Stronger Together, Tous Ensemble was to raise money for Food Banks Canada’s $150 million campaign to provide immediate support to food banks across the nation during the pandemic, and over the course of the 90-minute event, so many Canadians sent in donations that they broke the internet. “Canada, you’re amazing,” organizers of the event tweeted. “The @foodbankscanada website has crashed under the weight of your generosity.” For those who still wish to donate, there’s plenty of time. Text COVID to 30333, call 1 (877) 535-0958, or head to Foodbankscanada.ca to make whatever contribution you can afford.

In case you missed it last night, check out some Stronger Together highlights below:

Before performing Randy Newman’s “You’ve Got a Friend In Me” with her band, Grammy-winning Brampton native Alessia Cara shared a personal message to viewers about the importance of human connection and friendship, especially in the most trying of times.

“I want to play you guys a song that I really loved growing up, that I feel is pretty important and fitting in this crazy, weird, difficult time we’re going through right now,” she said. “And I think if there’s anything we can learn from it, it’s that there’s nothing we can’t get through together. In fact, everything’s always a little bit easier when we have each other. So hopefully this gives you a little bit of hope or joy.”

From her home in British Columbia, Shania Twain shared a special message for Canadian frontline workers—healthcare workers, drivers transporting food and health supplies, cleaners and first responders. “Thank you from the bottom of our hearts for putting yourself out there, putting yourself at risk,” she said, tearing up. “We couldn’t do this without you, we would be in a much bigger mess without you.”

She then went on to perform—with her labrador Melody by her side—a couple of verses of the title track “Up!” from her 2002 album, providing a slight coronavirus twist to the lyrics.

Michael Bublé and Barenaked Ladies performed a song titled “Gotta Be Patient” with Mexican singer-songwriter Sofia Reyes, tweaking the lyrics with coronavirus references. “I just want to see my friends / I want to walk the street again / But I gotta be patient / So let’s enjoy this confination,” began the song, leading into: “I just wanna feel your love / Coz Instagram is not enough for me / So I gotta be patient / Let’s enjoy this confination.”

The two actors provided some moments of levity, with Ryan Reynolds quipping that the day marked “the 10-year anniversary of the quarantine we’ve been on for the last six weeks.” Eric McCormack spoke of how Canadians can get through anything, sharing an anecdote from his youth, before going on to introduce Sarah McLachlan as “one of Canada’s most precious natural resources.”

“I spent my 20s in theatres from Vancouver to New Brunswick,” he said. “And let me tell you, if Canadians can brave a three-hour production of Henry IV Part Two in the dead of the Winnipeg winter, they can do anything.”

A tribute to Nova Scotia

“A week ago, the unthinkable happened, right here in my beloved Nova Scotia,” she said. “To the families, friends and communities of those affected, we want you to know that we are grieving with you and we send prayers for courage and strength as you try to make sense of this horrific tragedy.”

She went on to say, as she thanked healthcare workers across the country: “We as a nation are being put to the test right now as we face the unknown, but we’re facing it together and that’s the way we want to remember this. Here’s a song that’s become an anthem for times like this and one that I’ve actually sung a few times. Here are Voices Rock Medicine, a choir made up entirely of women physicians.”

A message from Canadian athletes

“With a focus on physical and mental health, let’s remember to stay in touch, stay strong, stay brave, and stay united,” said Virtue. “Thirty-seven-million strong, this is the most important Team Canada I have ever played on,” said Wickenheiser.

Canadian singers Tyler Shaw and Fefe Dobson, founders of an initiative called ArtistsCAN, brought some of the country’s biggest musicians together for a moving collaborative performance of the late Bill Withers’ “Lean On Me.” Justin Bieber, Michael Bublé, Avril Lavigne, Bryan Adams, Buffy Sainte-Marie, Jann Arden, Sarah McLachlan and others performed the special ensemble piece, proceeds from which will go directly to Red Cross Canada’s COVID-19 relief efforts. Canadians can contribute to the initiative by simply streaming the song, viewing the official music video, or downloading the single.

Prime Minister Justin Trudeau closed out the video with a message to the nation, saying: “We’re going to get through this together, by leaning on each other and protecting our frontline workers. Stay home, stay safe.”

In a move that raised a lot of eyebrows on Twitter, Drake closed out the show, getting the last word after Prime Minister Trudeau. His three-minute-long closing message thanked the artists who had performed for a good cause that evening, the frontline workers and first responders, and those who have to leave their families everyday and go to work amidst this crisis. “They’re the glue holding all this together so thank you very much for that,” he said. He also addressed the mental health challenges that people across the world are facing right now, whether they have been directly affected by coronavirus or not.

“I want to urge everybody that’s in their own space to find the silver lining in the times that we’re living in right now,” he said. “If you have a craft that can be worked on from home, it’s an amazing thing to continue working, keep your mind stimulated, get better at that thing that you’re passionate about. Better yourself mentally, physically, if you can stay active, if you can make a change you’ve always wanted to make in your life, right now is the time. Nurture your personal relationships… or decide which personal connections aren’t for you. Now is a time of self-reflection.”

“I hope we all emerge better people, more unified people, and I hope we are able to show each other the same amount of love we’re showing now.”

image via youtube
Get the best of FASHION in your inbox Thanks for signing up!
You’ll get the latest fashion, beauty and celeb news delivered right to your email Now, check your inbox to complete your subscription
We won’t ever use your email address for anything else
Want even more FASHION? Follow us on social media.