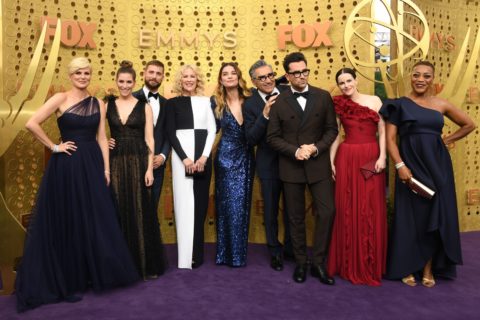 Schitt's Creek made it to TV Guide's Best Shows of the Decade list, the AMAs revealed their 2019 nominees and more...

Schitt’s Creek made it to TV Guide’s Best Shows of the Decade list
Everyone’s favourite heartwarming sitcom, Schitt’s Creek, has had a big year. Not only did it get nominated for four Emmy Awards this year, but it also made it to TV Guide’s list of the 25 Best Shows of the Decade. “Many consider the mid-to-late 2000s to be a golden age of comedy thanks to the likes of The Office, Parks and Recreation, and 30 Rock, but Schitt’s Creek can stand on its own next to those giants,” reads the list. Speaking of the show, Pop TV just announced the dates for its “Visit Schitt’s Creek” pop-up events in New York and LA, which will “give fans the chance to experience parts of the series’ most iconic sets this holiday season, along with interactive photo moments, access to limited merchandise and more.” Fingers crossed that a Canadian pop-up will be announced next…

Vin Diesel revealed Cardi B is in the next Fast & Furious film
After a role in this year’s acclaimed Hustlers, Cardi B’s next screen project is Fast & Furious 9. The film’s star Vin Diesel revealed that she had been cast in the hit franchise with an Instagram video from their last day of filming in the UK. “Day 86 here on the set of Fast 9,” he says in the video. “I know I’m exhausted.” Seated next to him, Cardi B says, “I’m tired. But I can’t wait. I ain’t gonna front, I think this is gonna be the best one.” The film is slated to hit theatres on May 22, 2020.

Sinéad Burke launched her own podcast
Irish activist and influencer Sinéad Burke just launched her own podcast, As Me with Sinéad, and her very first guest is none other than pop-icon-turned-fashion-designer Victoria Beckham. The former singer revealed that her mother encouraged her to have a Plan B ready just in case her musical career never took off. “My mum actually made me qualify as a dance teacher after I finished theatre school because she said it was always good to have something to fall back on,” Beckham told Burke. Upcoming guests on Burke’s podcast include American comedian Tig Notaro, British model Adwoa Aboah and Irish musician Hozier.

It’s here. Finally. ‘As Me with Sinéad’ launches today and the first two episodes are available to listen to now on Apple, Stitcher, Spotify and wherever you get your podcasts. . . For the first episode, I had the great privilege of sitting on a sofa talking about the ways in which the Spice Girls gave us permission to be ourselves, being bullied in the playground at school, learning to love yourself and your body and the value of kindness with @victoriabeckham. It’s not easy to be vulnerable and I’m so grateful to Victoria for sharing so much of herself. Teenage me wouldn’t believe this moment. . . [Video description: A line drawing of Victoria Beckham is revealed to a narration of her talking about kindness – to both herself and to other people.]

The American Music Awards announced their 2019 nominees
Post Malone is 2019’s most nominated artist with seven total AMA nominations including Artist of the Year and Collaboration of the Year (for ‘Sunflower’). Bradley Cooper and Lady Gaga are also up for Best Collaboration (for their Oscar-winning song ‘Shallow’), as are Lil Nas X and Billy Ray Cyrus for ‘Old Town Road,’ Marshmello and Bastille for ‘Happier,’ and Shawn Mendes and Camila Cabello for ‘Señorita.’ Up for the biggest award of the night—Artist of the Year—alongside Post Malone are Drake, Ariana Grande, Halsey and Taylor Swift. Voting for the AMAs, the world’s largest fan-voted awards show, is now open and will close at midnight on November 20. For the full list of nominees, head to Billboard.

And ICYMI: Selena Gomez released not one but two new singles this past week.