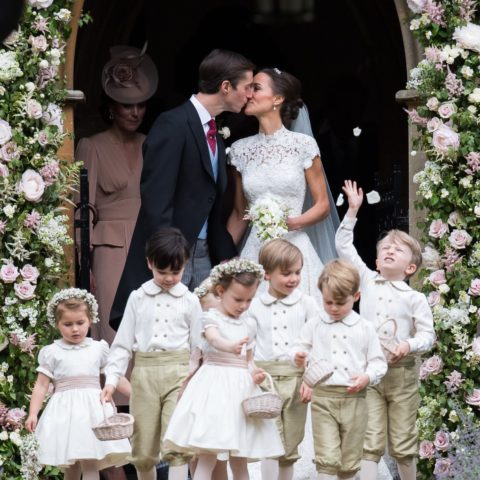 Pippa Middleton’s Wedding: Everything We Know About the Social Event of the Year

It may not be a royal wedding, but as British high-society events go, Pippa Middleton’s nuptials to financier/millionaire James Matthews will be the social event of the season.

On Saturday, May 20, 2017, all eyes were on Kate Middleton’s younger sister. From her gorgeous Giles Deacon gown to her au naturel beauty look, if we thought that Pippa stole the show back at her sister’s wedding, this is next level.

While we await more details to be revealed from the reception, we track down everything there is to know about the wedding of the year. Consider this the only guide you’ll need to Pippa Middleton’s wedding.

Kate was not part of the wedding party.

The title of “maid of honour” is usually reserved for single ladies, so Kate, unfortunately, was not part of the bridal party. Although she could have easily changed the title to matron of honour, rumour has it that the Duchess of Cambridge was afraid she would draw too much attention away from her little sister on her big day. But Kate was seen front and centre, fixing the train of her sister’s dress before she went down the aisle and gently shushing the bridesmaids and page boys as they entered St. Mark’s Church.

The groom’s famous sibling was a part of the bridal party.

The groom’s brother, Spencer Matthews, stood up with his brother as best man. In case you’re not up to date on the British reality TV scene, Spencer is a TV personality and starred in shows like Made in Chelsea and the British version of The Bachelor.

Meghan Markle will attend the wedding, but there’s a catch.

ICYMI: There were rumours of Pippa instating a “no ring, no bring” policy that may or may not have been directed at Prince Harry’s new lady, Meghan Markle. While the Suits actress wasn’t at the church, ET reported that Prince Harry returned to his apartment at Kensington Palace to fetch his girlfriend and bring her to the reception. Markle flew to London this past Tuesday, according to The Daily Telegraph, to be there for the wedding. She was spotted on Friday leaving a spa in London’s Soho neighbourhood.

Though the bride was greeted by 100 royal fans when she arrived, according to the BBC, making her a celeb in her own right, some other crowd-pleasers had already arrived: Princess Eugenie and partner Jack Brooksbank, and Roger Federer and his wife, Mirka.

Pippa and James said “I do” in her hometown.

The duo got married in Pippa’s hometown at St. Mark’s church in Englefield, Berkshire. If you recall, the Middleton clan (including Prince William, Prince George and Princess Charlotte) were there this past Christmas for the annual service. Pippa’s father, Michael, escorted his daughter to the church in a 1951 Jaguar.

The reception will take place in the Middleton family’s backyard.

According to The Telegraph, the reception will take place seven miles away from the church at the Middleton family estate in Bucklebury, Berkshire, which conveniently has an 18-acre garden. Last we heard, a £100,000 glass marquee and the most luxurious temporary loos have already been set up. Oh, to be on the guest list.

And it will be Scottish-themed.

Given that the groom’s family owns a castle and 10,000-acre estate 15 miles from Loch Ness, a Scottish-themed wedding is no surprise. The lucky guests will get a taste of the local delicacies, including haggis canapés and lamb, that are apparently being sourced from the region around Glen Affric. Of course, local whisky will also be present. But that’s not all. We hear £40,000 worth of Beluga caviar (a.k.a the most expensive type you can get) will also be served at the reception.

Pippa and Kate opted for a low-key bachelorette party.

Remember when videos of Prince William flexing his dad dance moves at a Swiss club leaked and people were furious that the royal missed out on the Commonwealth Day service at Westminster Abbey? Well, it looks like he wasn’t the only one partying. According to The Sun, Kate and Pippa flew to a luxury chalet in Meribel, France, to go skiing to celebrate the bride-to-be’s under-the-radar hen do (read: bachelorette party) that same weekend.

Guests at #pippamiddleton's wedding have been asked to take second outfit for reception. Is this a trend? Sounds like a bore to me

And you thought deciding on one outfit was hard. According to Richard Eden, a reporter from The Daily Mail, the latest rumour is that wedding guests were asked to bring a second outfit to wear to the reception after the ceremony. While this policy is beyond OTT, if it is true, we can’t wait to see Kate’s second ensemble of the night.

Shedding before the wedding? Head to eonline.com to learn about Pippa Middleton's fitness regimen and go-to-diet. (?: TheImageDirect.com)

Pippa was enrolled in a wedding boot camp.

The future bride went to great lengths to be sure she looked her very best on the big day. (And who could blame her with all the attention?) According to E! News, Middleton signed up for a customized three-month membership at the super-luxe Grace Belgravia health club in London to help keep her in shape. The program reportedly included a personal trainer, facial and body treatments and a variety of classes (yoga, pilates, spinning and meditation, to name a few). It also offers healthy meal deliveries.

We’ll be sure to keep you posted right here. Check back often for more updates!