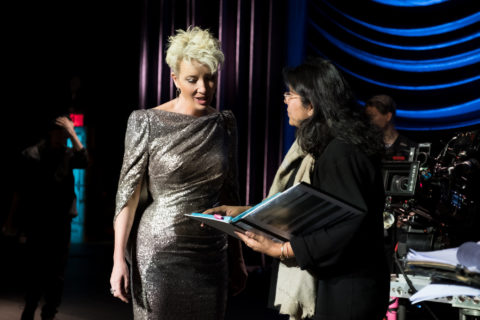 "When I read it, I felt it was so similar to my story," says the Indian-Canadian director of Kaling's script.

Katherine Newbury, Emma Thompson’s character in Late Night, is the sole female late night talk show host on network TV, making her a bit of a unicorn not just in the fictional world of the film but also in our own reality. Until a few months ago, when it was announced that Indian-Canadian Lilly Singh would be NBC’s newest late night host, we didn’t even have a Katherine Newbury. (We do have Samantha Bee—thank God—but hers is a weekly show on TBS, not a daily affair that comes to our screens every night a la Late Night With Seth Meyers on NBC or The Late Show with Stephen Colbert on CBS.)

Anyway. Back to the film. Katherine’s the only woman in late night but she doesn’t want to make a big deal about how she’s the only woman in late night. A character points out early in the film that she’s “a woman who hates women.” It might be why she has an all-male, all-white writers room, and why her show never veers away from the formula every other late night show with a male host follows. It’s why, after 28 years on air, her show is in danger of being cancelled—it’s not original, it’s not sharp, and well, it’s not very good. Enter Mindy Kaling’s character, Molly Patel. Hired in a knee-jerk attempt to diversify the show’s staff, Molly’s in a position many women—particularly women of colour—around the world will recognize: being the odd one out in the room. It’s something both Kaling, who also wrote the film, and Nisha Ganatra, the director, have experienced their entire careers. Ahead of the film’s release this weekend, we caught up with Ganatra, a Vancouver-born Indian Canadian, to learn more about the film and how it resonated with her own story.

Molly's here to shake things up ? Meet her in #LateNightMovie! Get tickets to early access screenings. Link in bio.

I know women don’t like to blow their own horns too much, and Canadians even less so, but what made you feel like you were the ideal person to direct this movie?
When I read it, I felt it was so similar to my story. Mindy and I are two of the very few Indian women working in comedy and television right now so it’s rare that someone else can write an experience that’s so close to yours. And I think for Mindy it was rare to meet a director who could come in and say ‘this is my story.’ I think it was unique and pleasing to both of us that we could connect on this level.

In a past interview, you shared an anecdote about something a friend said to you when you were worrying that you might have gotten a job because you’re a minority. And your friend said, ‘well you don’t know about all the jobs you didn’t get because of that.’ Was that a moment of epiphany? Did things sort of change for you in that moment?
Yeah, she basically said that the opportunities that hadn’t been open to me because I’m a minority were something I could not quantify in any way; it’s an unknown bias. And so [I felt] ‘don’t worry about it, just do the work ahead of you. Even if you were hired because you’re a minority, prove that you’re so much more than that.’ We don’t know how our opportunities come to us sometimes but we do have control over the kind of work we do and our work ethic and the quality of our work so that was a big message. However you get the door open, once you’re in there, don’t blow it.

Even this queen needs to shake things up sometimes. See #LateNightMovie early next week and you'll know why. Link in bio.

I remember a scene in the film where Emma Thompson says something about never wanting to hear the phrase “as a female [xyz]” ever again. On the one hand, I get that frustration but on the other hand, there are so few women at the top in any industry that you’ve got to sort of make a noise about it. Where do you land on that, as a “female director”?
You know it’s interesting, Emma Thompson’s character says that but I think there’s a bit of a generational divide. For me, I’m so thankful and interested in that generation of women who really broke the ground for us to be able to come in and do this work. I think in the case of Emma’s character she sacrificed a lot, including her identity, in order to fit in to this boys’ club and I think she did so somewhat unconsciously. And what Mindy’s character does is bring a sort of consciousness, like ‘Yeah you are a woman, you are a minority, and here’s the strength in that. Here’s why you should be doing things no one else can do, instead of trying to fit into the mould that was created.’

From what I’ve read, there were a lot of women involved with this film, across various departments. What was it like working with a group of women on this, and how often has that happened before in your experience?
Even when I made my first film [Chutney Popcorn] it was a conscious effort because there was such poor representation of women behind the camera. If women aren’t in charge of telling their stories, a lot of those stories aren’t going to get told. In my career as a director ever since day one I consciously decided and worked hard to have female department heads and collaborators. I don’t know any other way. When it’s not balanced behind the camera, it feels wrong because you’re just missing out on so much artistry and so many different points of view. It feels like you’re putting yourself at a disadvantage as a storyteller.

And what was it like working with the great Emma Thompson?
Emma Thompson is someone I’d dreamed about working with and watched ever since I started watching movies. She’s such an icon and such a huge movie star, it was inspiring and beautiful to see how hard she works and how talented she is and how generous a soul and spirit she is. There’s nothing about her that’s pretentious or ego-driven in any sort of way. She’s all about the character and the work at hand, and also just a lovely human being—she wants to connect with people and hear their stories. If I could just make movies with Emma Thompson for the rest of my career, that would be fine.

Photography courtesy Entertainment One
Trends, beauty secrets, culture & more
Yours for only $1 an issue
Subscribe now!