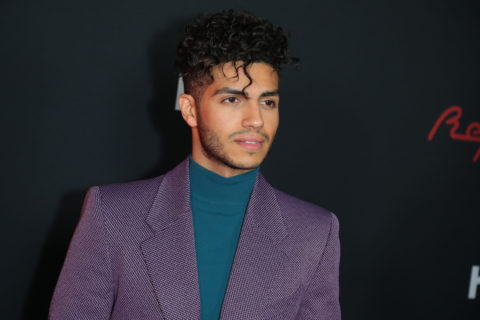 "You don't have to be vegan to eat vegan. And that's really what evolving vegan means."

Mena Massoud doesn’t believe in labels—he believes everyone is a work in progress, and that’s why he’s releasing a cookbook titled Evolving Vegan.

“When I was growing up, vegans got a bad rap of being very militant or strict—a ‘one way or the highway’ kind of deal,” he says over the phone from his home in Los Angeles. “But our world is obviously changing. We are all evolving towards the vegan lifestyle. Even humongous corporations like Beyond Meat and Impossible are multi-billion dollar companies now in a multi-billion dollar industry. So you don’t have to be vegan to eat vegan. And that’s really what evolving vegan means. Encouraging people to evolve in the right direction and eat more plant-based foods.”

Massoud first began thinking of veganism back in 2015, when he and two other actor friends in Toronto started researching animal products from the lens of the impact they had on their body.

“We were young guys in our 20s working out and wanting to get really fit, and as we started finding out how animal products negatively affected our health and our environment, we started slowly cutting things out. I cut out red meat first and then I cut out eggs and then I cut out chicken. That’s really where the idea of evolving comes from. You don’t do it all at once. I don’t encourage people to go from eating meat to dropping it all cold turkey. I encourage people to evolve in that direction and do it slowly.”

To that end, he decided to launch a cookbook—which releases tomorrow, September 15—that rounds up not just some of his personal favourite vegan recipes but also recipes from vegan restaurants around Canada and the United States. Part cookbook, part travel guide, it’s an interesting marriage of concepts.

“If I were to come out with a ‘vegan cookbook’ only vegans would buy it,” he explains. “I wanted to show people that vegan food is incredibly accessible no matter where you are in North America, whether you’re in Portland or Washington DC or New York or Toronto. A lot of people who are going to buy the book will probably recognize a restaurant or two and then they’ll have a recipe from that restaurant forever.”

Massoud first began working on the cookbook with his business partners in 2018, self-funding their travel to the various locations spotlighted in the book.

“Honestly I just put together a list of cities that I really wanted to visit. Of course New York and Los Angeles are meccas of vegan food but I had never been to Portland, Seattle, Vancouver. Before we got there, I did a lot of research, looked up reviews and different cuisines. It’s an incredibly diverse book that has Egyptian cuisine, Mediterranean, Indian, Ethiopian, Taiwanese, Chinese, Mexican. And once we got there, we made sure to get recommendations from locals.”

Having grown up in Toronto, Massoud has seen the restaurant landscape in the city shift dramatically over the years.

“The year after I graduated from theatre school, in 2015, I went vegan so I was able to discover all these incredible vegan spots that hadn’t existed before. The Planta franchise is one of my favourites. The Japanese-inspired Planta on Queen Street is a restaurant I always visit when I’m back in town.”

In addition to his cookbook, Mena Massoud also launched a company called Evolving Vegan in 2018 which functions as a social media community on Facebook and Instagram where people can post their own recipes and talk to each other.

“The whole point is to encourage people to be non-judgmental and to encourage their community to be more plant-based,” he says. “I just wanted to eliminate the labels that come with the way people eat. Vegan can be something you eat once a week or order in. It shouldn’t be a label that has this huge sense of judgment around it.”

Photo by Leon Bennett/WireImage
Get the best of FASHION in your inbox Thanks for signing up!
You’ll get the latest fashion, beauty and celeb news delivered right to your email Now, check your inbox to complete your subscription
We won’t ever use your email address for anything else
Want even more FASHION? Follow us on social media.