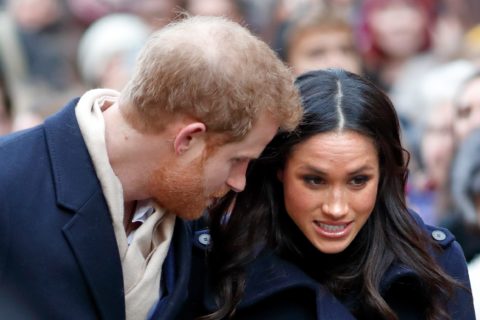 Royalty isn’t all crown jewels and 18th century castles. British police are investigating after an envelope addressed to Meghan Markle at Kensington Palace was discovered to contain white powder. The powder, purporting to be anthrax, came with a racist message directed at the princess-to-be.

The Evening Standard, who broke the story, reports that the letter was intercepted before it reached Markle and her fiancé, Prince Harry. The engaged couple, however, have since been informed of the safety scare and disturbing note.

The hoax anthrax attack is the first security alert that Markle has faced since moving in with Price Harry — but it’s far from the first threat she’s received. Markle, whose mother is black and father is white, has faced mass racism since her relationship with Prince Harry was first revealed. In November 2016, the prince denounced the racist attacks against her in an official statement: “Some of this has been very public — the smear on the front page of a national newspaper; the racial undertones of comment pieces; and the outright sexism and racism of social media trolls and web article comments.”

Scotland Yard is already on high alert ahead of the royal wedding in May. Until the vows are said, Markle isn’t technically an official royal family member — but like the Duke and Duchess of Cambridge, she already has security team from the Met’s royalty with round-the-clock protection. And like all Princesses, Markle will always have her Prince — who served over a decade in the army — to protect her from the bad guys. (Though she seems to be pretty good at handling her safety all on her own.)