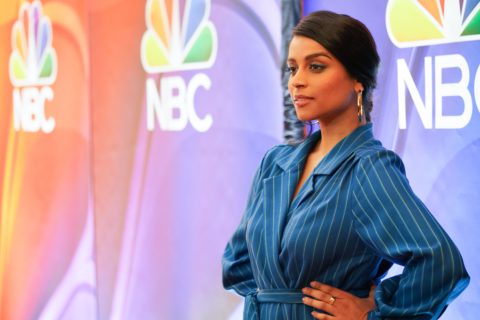 Lilly Singh has amassed a fan following of millions ever since she landed on YouTube in 2010 with skits about the Punjabi immigrant experience, young adulthood and pop culture. As someone who’s never found her caricatures of Punjabi families amusing—they’re wildly at odds with my own experience as a Punjabi Indian and more than slightly offensive—I wasn’t as over the moon as others when NBC announced that she would be taking over the spot vacated by Carson Daly, but the significance of it wasn’t lost on me either. Singh is currently the only woman with a late night show on network television (and the first openly queer woman of colour)—a huge accomplishment that deserves to be celebrated.

The show, titled A Little Late with Lilly Singh, premiered last night at 1.35am ET, with an early release on YouTube at 10pm. The rap song Singh performed for her cold open was the strongest segment of the half-hour show, setting the tone for the kind of brand she hopes to build on NBC. A meeting with an all-white, all-male roomful of executives who want her to wear a navy suit and comment on the news headlines leads to Singh explaining—aka rapping—what she plans to bring to the table as a woman with a different perspective than the other hosts on air.

“Hello my name is Lilly and I ain’t a white man/My skin has some colour and it ain’t a spray tan,” she raps, as a diverse group of lithe dancers twirl and leap around her. “I know you’re only used to Jimmys up in the spotlight/But I’m gonna throw some melanin up in your late-night.”

While other late night hosts like Seth Meyers and Stephen Colbert have found immense ratings success in skewering the President on a nightly basis, Singh makes it clear she won’t be following suit:

“I ain’t talkin’ bout Donald unless his last name is Glover,” she raps somewhere between verses about breastfeeding at work and coming from “a nice hood” in Canada.

Singh certainly seems to understand the significance of breaking into the boys’ club that makes up late night TV, and according to her opening rap number, has taken steps to ensure her show is executed and run differently than others on air, with a writers’ room that’s “more than 50% women and people of all races.”

“I want my show to be representative of the world, which is why I don’t want to do a show that is just all American politics – especially being a Canadian,” she told NOW Toronto ahead of the show’s premiere. “I want to talk about women’s issues, race and rights, but through sketch comedy. I’ve always felt that was the best vehicle to talk about issues because people are more receptive.”

There wasn’t much sketch comedy in the debut episode, which went from the monologue into a bit with Rainn Wilson and his “white noise machine” that mostly fell flat. She then introduced her first guest, Mindy Kaling, whom she credits with paving the way for Indian Americans in entertainment. The two swapped praise about how good it was to see the other on the global stage, before touching on the happy irony that Kaling’s most recent film Late Night was itself about a female talk show host.

Having grown up watching late-night television devoid of people who looked like her, Kaling said, “If I had, growing up, seen you on TV, it would have been — I mean, I was already obsessed with late-night TV, but it was like loving something that didn’t love me back. And then to have had you? I mean, it’s huge. I can’t wait for my daughter to watch this show, 20 years from now when you’re still doing it and wishing you didn’t have to.”

The two then chatted about what The Office might look like if it existed today, the Tamil-Canadian actress (Maitreyi Ramakrishnan) Kaling just cast in her upcoming Netflix show, and the makeup on Euphoria.

Singh did promise that her show would deliver “positive, uplifting, comedic, good vibes,” and with its first episode it largely achieved that mandate. I may not be a fan of her over-the-top brand of comedy, but I’ll be tuning in as long as she pivots away from lampooning immigrant parents or appropriating black culture and chooses instead to voice her own unique opinions as a queer woman of colour and to amplify the voices of minorities. The fact that she’s on that stage is a win in itself. Now let’s see how she chooses to use it.

Photo by Shutterstock
Get the best of FASHION in your inbox Thanks for signing up!
You’ll get the latest fashion, beauty and celeb news delivered right to your email Now, check your inbox to complete your subscription
We won’t ever use your email address for anything else
Want even more FASHION? Follow us on social media.