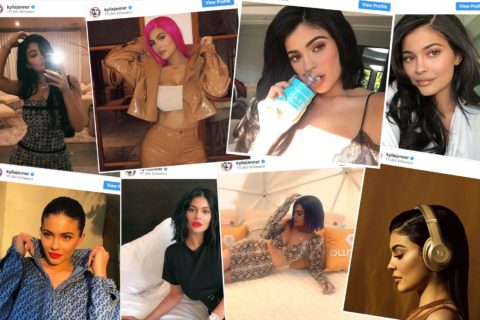 Can You Guess How Much It Costs for an #Ad on Kylie Jenner’s Instagram?

Hint: you probably can't afford to buy yourself a mention.

Forbes‘ “Top Earning Celebs” isn’t the only list Kylie Jenner is topping right now. Sure, she isn’t old enough to buy a beer in her home country—but a post on the makeup mogul’s Instagram is worth a whopping $1 million dollars, making her the “richest” Instagrammer in the world. (After all, the “self-made billionaire” has built her fortune on the backs of her social media followers. Where would Kylie lip-kits be without her pouty selfies?)

With 111 million Instagram followers, Kylie is able to charge more per post than any of her famous family members, including sisters Kendall and Kim. And they aren’t the only influencers Kylie’s out-influencing: she’s making more per post than Selena Gomez, the user with the most followers on the platform. (Selena is currently sitting in second place, at 138,000,000 followers and $800,000 per post.)

#ad I can always count on my @sugarbearhair vitamins to help keep my natural hair healthy and strong ??+ they taste delicious! #sugarbearhair

Now I’m sure you’re thinking: how exactly does one acquire such data? I tried getting ahold of Kylie to ask how much she’d charge me for a mention on her feed, (I could really use the extra followers!!) Sadly, I was unable to reach her. So I used the info published by Hopper HQ, the #1 visual social media planner, who releases an “Instagram Rich List” every year after speaking with relevant influencers, brands and marketing companies.

Photography via Instagram/@kyliejenner
Get the best of FASHION in your inbox Thanks for signing up!
You’ll get the latest fashion, beauty and celeb news delivered right to your email Now, check your inbox to complete your subscription
We won’t ever use your email address for anything else
Want even more FASHION? Follow us on social media.