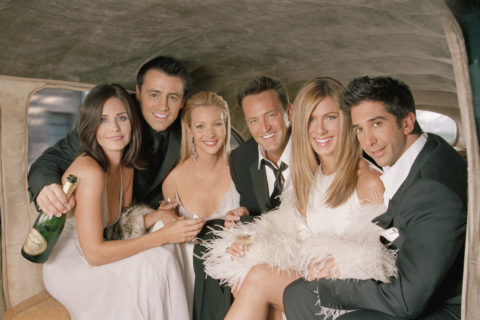 Rejoice, For There Seems to Be a Friends Reunion in the Works

Here's hoping it all works out, because a reunion would be perfection.

When it was announced that Friends would be leaving Netflix at the end of 2019 to find a new home at upcoming streaming service HBO Max, the world collectively groaned. However, the HBO Max partnership is already off to a good start. According to The Hollywood Reporter, “the six core stars and the creators of the NBC comedy from Warner Bros. TV are in talks to reunite” on the platform.

“Talks are currently underway for an unscripted reunion special that would feature Jennifer Aniston, Courteney Cox, Lisa Kudrow, Matt LeBlanc, Matthew Perry and David Schwimmer, as well as series creators David Crane and Marta Kauffman,” reports THR. “Sources caution that a deal is far from done and agreements with cast and creatives still need to be hammered out. When and if deals are completed, the challenge then becomes sorting out everyone’s schedules.”

A reunion with the iconic cast seems like a pretty great way to celebrate the show’s new home, and given how much excitement and love there is for Friends even 25 years after it debuted, it’s sure to be a success. In case you forgot, Jennifer Aniston practically broke Instagram when she joined the platform last month with a picture of the six of them, a rare sight that seemed to bring the world a lot of joy (and also helped her break the record for quickest account to amass a million followers).

The last time the cast reunited—sans Matthew Perry though—was in 2016, for a TV special celebrating legendary director James Burrows, who has directed several episodes of Friends, as well as other hit shows like Will & Grace and Cheers. Fans have been clamouring for a Friends reunion or reboot of some kind for years, and last month Aniston revealed that there might just be something in the works. “We would love for there to be something, but we don’t know what that something is. So we’re just trying. We’re working on something,” she told Ellen DeGeneres. Stay tuned for more updates.

Photo by NBCU Photo Bank/NBCUniversal via Getty Images
Get the best of FASHION in your inbox Thanks for signing up!
You’ll get the latest fashion, beauty and celeb news delivered right to your email Now, check your inbox to complete your subscription
We won’t ever use your email address for anything else
Want even more FASHION? Follow us on social media.