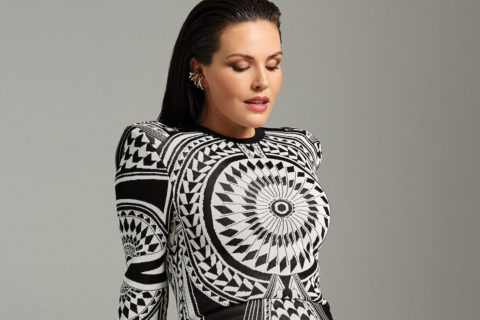 Christina Schmidt on Her Status as a Body-Positive Role Model

Since her days starring as the ill-fated Terri on Degrassi: The Next Generation (her character was insecure about her body, struggled to fit in and eventually fell prey to an abusive boyfriend), Christina Schmidt has been a role model for anyone who’s lacking in self-love.

“Growing up, I never thought I was an inspiration to anybody in any way,” says Schmidt, who now works as a model and is based in Toronto. Full-figured TV leads were rare when she joined Degrassi in 2001 at age 14. “I never realized that some of these young girls really needed someone to look up to,” she says. “There wasn’t Instagram or Facebook, and the majority of television stars were definitely not as diverse as those you see today, so having someone like them on a TV show was huge. This all just started making sense to me years later, though, when they would express how I made such an impact on their lives.” Almost 20 years have passed and Schmidt is still receiving fan mail about the show.

It may have taken time for Schmidt to realize the potency of her relevance in pop culture, but her confidence and positive vibes were palpable at our FASHION cover shoot, where she rocked a body-con Balmain maxi-dress. “A lot of curvy girls wear things that don’t show their shape—they wear baggy T-shirts and baggy pants to cover everything up,” she says, acknowledging long-standing notions about what types of clothing are deemed appropriate for what body shapes. She points to tropes like horizontal stripes adding width to a body frame as something that will deter many from experimenting with fashion.

But Schmidt recalls being drawn to the expressive potential of style early on. As a teenager in Kitchener-Waterloo, Ont., she’d cut up and customize T-shirts and sweatshirts. And she says that her exposure to the fashion industry has helped her to develop an adventurousness when it comes to dressing—through “the power of combining two things I’d never put together, opening my mind to colour and shapes and stepping outside a safe boundary.”

Schmidt shops everywhere—from vintage stores to Holt Renfrew—and expresses great enthusiasm over the number of brands that are expanding their size range while refusing to exploit the “plus” classification as a marketing tool. She highlights a gig she had with beauty line L’Occitane as an important example. “They just wanted me,” she says. “It wasn’t anything about diversity.”

“As long as you feel good, that’s all that matters. When you feel confident, people notice that more than anything.”

She also includes work for Canadian designers Hilary MacMillan, Lesley Hampton and Hayley Elsaesser on her resumé, as well as a video appearance for fellow Degrassi alum Drake, leaving no doubt she’ll continue to be a strong example of self-assurance for many.

“It’s about embracing everything and not being scared,” she says about her personal style mantra. “Never care what anybody thinks. I know that’s such a simple thing to say, but, really, you could be styled by the best stylist in the most expensive outfit and there’d still be somebody who doesn’t like it. As long as you feel good, that’s all that matters. When you feel confident, people notice that more than anything.”

Photography by Porus Vimadalal. Styling by Lucia Perna. Creative direction by George Antonopoulos. Art direction by Danielle Campbell. Hair and makeup, Susana Hong for P1M.ca/Armani Beauty. Hair and makeup assistants, Arielle Park, Kaila Baker, Romy Zack and Sierra Elliott. Manicures, Leeanne Colley for P1M.ca/Tips Nail Bar. Fashion assistant, Pouyan Reisdanaee. Photography assistants, Arash Jahromi and Saishi Xu. Dress, $3,750, Balmain at The Room at Hudson’s Bay. Shoes, $195, Jeffrey Campbell. Earcuffs, from $355, Alan Crocetti at Archives Boutique. Ring, $550, POG at Archives Boutique.
Get the best of FASHION in your inbox Thanks for signing up!
You’ll get the latest fashion, beauty and celeb news delivered right to your email Now, check your inbox to complete your subscription
We won’t ever use your email address for anything else
Want even more FASHION? Follow us on social media.